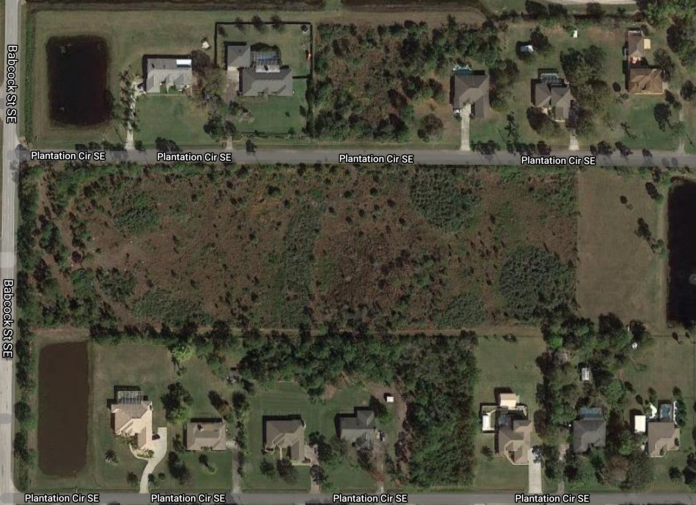 Florida developer Brian West, who was recently arrested on bribery charges in Palm Bay has withdrawn his application for rezoning a property he owns in Plantation Circle.

The property in question has been a topic of contriversy in Palm Bay for several years. It is adjacent to the Plantation Circle subdivision, which is a small community of single family homes on 1 acre lots in South East Palm Bay.

“Due to the nature of charges now filed against one of the LLC’s principals, Brian West, which he adamantly denies and fully believes he will be vindicated, we understand and share the city’s concern that it will be impossible for West Pointe to receive a fair and impartial review and hearing on these applications at this time,” wrote Robert Schwerer, the company’s Fort Pierce attorney.

West was arrested after attempting to bribe current city councilman Brian Anderson, who was wearing a wire for FDLE and the FBI as part of an ongoing investigation into corruption in Palm Bay.

Anderson has worn a wire in the past for the same agents which came to light after the arrest of former Deputy Cit Manager, David Isnardi was arrested. Councilman Anderson agreed to wear the wire after admitting to taking $10,000 in illegal campaign finance donations during his last election campaign.

Anderson’s recording revealed that former fired City Manager Gregg Lynk was orchestrating a deal with Anderson to provide him with a vehicle allowance if he voted a certain way on the same property in Plantation Circle.

Lynk was fired as the first order of business following the 2018 general election which ousted disgraced Councilman Tres Holton by Deputy Mayor Kenny Johnson, and the reelection of Councilman Jeff Bailey.

The most recent investigation revealed that local hotelier PK Kapur was working as a middle man between West and Anderson to facilitate the bribe.

Felix and Foster both reported receiving a donation from the developer however, Medina says he met with West but did not take money from him. He then later told Florida Today that he did take money but returned it after speaking to residents in Plantation Circle.

Felix, who sits on the City’s Planning and Zoning board along with Medina’s Mayoral opponent Kay Maragh, both voted against the project which was rejected by the entire board.

All 3 candidates, Medina, Felix, and Foster, won their respective races.

Residents of Plantation Circle has been very vocal in their opposition of the commercial development of the property which sits on Babock Road. Much because of the secrecy of the developer of exactly what kind of business he wanted to put there.

The Council voted to continue the hearing for the property until after the new council was elected. To the satisfaction of the residents of Plantation Circle, that hearing will not take place as a result of withdrawing the application by the developer.

All 3 newly elected Councilmen publicly spoke against the project, despite receiving support to their campaigns from the developer. Although Medina denied taking financial support from West, he did ask for permission to put a large campaign sign on the property itself which is on a high traffic location.

There is still a possibility that West may resubmit his application in the future, but there are no indications of that anytime soon.

West Pointe LLC “fully intends” to reapply for the rezoning at the appropriate time in the near future, Schwerer wrote.

“West Pointe firmly believes that the highest and best use of its property is commercial and that the concessions it has made throughout this process relating to landscaping, limited building size and height, and setbacks makes the property a highly desired project for both the city and the surrounding neighborhoods,” he wrote.

All 3 seats were open seats this year for the council. Mayor Capote was termed out and could not run for reelection. Councilman Harry Santiago decided not to run in order to commit more time to his family and personal ventures.

Anderson initially sought to run for Mayor himself, then decided to rerun for his own seat. After we broke the story last year of his involvement in the Isnardi scandal, he decided to withdraw from the race.

Deputy Mayor Kenny Johnson has not had the opportunity to vote on the project during his tenure, as the last vote came before he was elected. Johnson was in favor of continuing the hearing until after the election. It was stated that West believed he had the support of Johnson for the project, however Johnson stated he would vote for what he thought was best for the City. Johnson met several times with members of the community to hear their concerns about the project before his election and after. He received donations from both West and residents within the community itself.

All candidates and Johnson reiterated that a campaign donation does not buy a vote. They believe that individuals donate to their campaigns because they believe them to be the best person for the job.