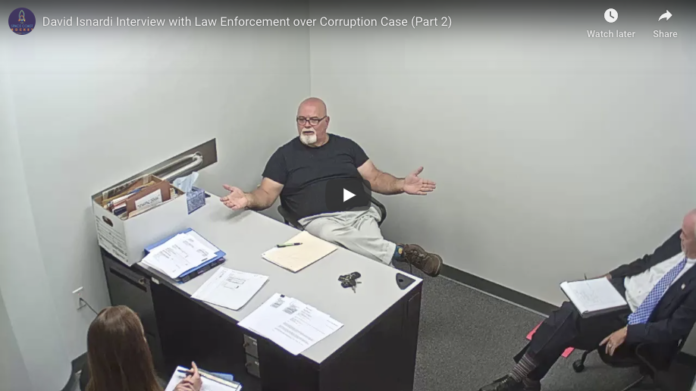 Now that the David Isnardi case has come to a close with him accepting a plea deal, previous parts of the investigation which were not publicly available have been released by the State Attorney’s office. (2 part video at bottom of article)

In August of 2017, Isnardi came in for a voluntary meeting with FBI and FDLE investigators to tell his side of the story, accompanied with his attorney at the time, former Judge John C. Murphy; a former Colonel in the US Army Special Forces.

The 4 hour interview contains much of the information made public in the original arrest warrant issued for David Isnardi last year. Discussions of cocaine use, addictions to strippers and prostitutes, and other illegal and immoral activity almost seemed normalized in these discussions.

Isnardi goes into detail about the allegations of the misuse of funds that benefited disgraced former City Councilman Tres Holton.

He talks about his involvement in the elections of Councilmen, Brian Anderson, Tres Holton, and Jeff Bailey. Investigators allege that it was all an elaborate plan to get fired ex City Manager Gregg Lynk hired who then in turn hired Isnardi as the City’s Deputy City Manager, who Isnardi himself stated he didn’t think he was qualified for in the interview.

They also allege that Isnardi’s friend and business associate Joe Aguiar (who was arrested on the same charges) was trying to control members of the council in order to get the votes he wanted for properties he planned to use for a future scrap yard and marijuana business.

The investigation revealed that current Councilman Brian Anderson did take $10,000 in illegal campaign funds from Aguair, which he confessed to investigators. Anderson then agreed to wear a wire for law enforcement for quite some time which revealed attempted bribes from Gregg Lynk, misdealings with former Palm Bay Mayor John Mazziotti, and others. Isnardi and Aguiar were the only ones arrested so far from the years long investigation.

Isnardi mentions on two occasions he was asked to use now elected Melbourne Mayor Paul Alfrey to try and setup Councilman Jeff Bailey with illegal drugs in his vehicle. Alfrey was a former K9 Police officer with the Melbourne Police Department who resigned after an investigation into his mishandling of narcotics before he could be removed. (This portion is found in the part 2 video of the interview at 0:29:40 and 2:13:00)

There were several new names mentioned in the interview that were not seen in the original arrest affidavit or investigative summary.

One unknown is Palm Bay resident Matthew Wolfe. Isnardi stated that Wolfe worked as his volunteer coordinator for his wounded warrior organization. He is the one who Isnardi charged with picking up an automobile that was donated to the organization for a wounded warrior, but transferred to an individual without going through program.

Wolfe is well known on Facebook as an antagonizer in political groups and is the administrator of The Conservative Voice of Brevard Facebook group and has an extensive criminal history of burglary, grand theft, trafficking in stolen property, forgery, fraud, and others. Wolfe tries to constantly deny the charges but they’ve been verified.

The most high profile name brought up is former Florida Senate President and former US Senate candidate Mike Haridopolus. He now serves as a lobbyist for a long list of clients and municipalities in Brevard County. (This portion of the video is Part 2 at 1:27:00)

He raised millions for his run for US Senate before withdrawing. That money in his PAC has been used to fund campaigns all over the State of Florida and support candidates in Brevard County. Strangely the person he uses to manage those funds was Tres Holton. Agents believe that Haridoplus uses Holton to be the potential fall guy for the questionable political practices and dealings he is involved in to include procuring prostitutes for clients. Holton’s involvement in local corruption makes him the perfect fall guy in their eyes.

This is a list of the clients he is currently registered as their lobbyist.

Mike has been heavily invested in both the Melbourne and Palm Bay’s Mayor races, endorsing Paul Alfrey and Rob Medina, both of which who won.

In 2018, Mike Haridopolos said he deserves a tax break because of Indian River Lagoon problems on his $2.9 Million Mansion on Lansing Island in Indian Harbor Beach (who he is the lobbyist for). His house is currently under contract for sale, but it is unknown to where he is moving.

Also, on August 31, 2020 the Friends of Mike H , which is Haridopolos PAC gave $20,000 to the Florida PAC Libertatem. Even though the PAC name was misspelled, the doorhanger which was produced and distributed in the City of Melbourne promoted one of Haridopolo’s endorsements for Melbourne Mayor Paul Alfrey. A few other Republican candidates, Tim Thomas, Logan Luse and David Neuman were promoted for Melbourne City Council on the doorhanger. The four candidates campaigned together with Paul Alfrey as a slate .

The doorhanger could be seen as misleading to the community by stating, Get to know your REPUBLICAN candidates. The wording on the doorhanger made it seem like this was produced and approved by the local Republican Party while it left out other Republicans in the race.

One of Mike Haridopolos’ listed clients is the City of Melbourne.

The discussions of Mike came up after a lengthy conversation about the development of the St. John Heritage Parkway. During this portion of the interview, Isnardi says he believes land owner Ben Jefferies paid someone off in order to get the plans for the parkway to run through his properties is South Palm Bay. (Part 2 video at 1:02:00) Holton lobbied on behalf of the other landowner Andrew Machata of Rolling Meadow Ranch, in 2019 for a bill presented by State Representative Randy Fine to benefit Machata and his properties. The bill was passed.

Fine was submitted a public records request by Robert Burns in 2019 asking for the communications between him and Holton for this bill. Fine then called Burns and stated it would cost him thousands of dollars to get the records, and that he should just ask Fine directly what he was looking for. Fine has yet to fulfill the request.

The Parkway has been a topic of controversy and corruption for several years, and will serve as the catalyst for major future development in Palm Bay. It was also a large portion of the findings in the Palm Bay Audit by the States Joint Legislative Auditing Commission.

Back to the Interview

It was believed by investigators that Isnardi and Aguiar were trying to coerce and control councilmen to vote their ways.

Brian Anderson accepted the $10,000. They tried to set up Bailey and Holton by catching them on video in compromising positions. Bailey also admitted to taking and illegal $300 which he then turned into investigators.

Agents brought up Palm Bay Mayor Capote alleging that Aguiar gave him a home to live in rent free and a vehicle. They believed that Aguiar did this to try and control the Mayor’s vote. Aguiar then ended up trying to evict Capote from the home.

Isnardi says he doesn’t believe that was the case because the Mayor normally voted against their interests, and believed that Aguiar and Capote had a falling out quite a while ago. (Part 2 Video 2:06:00)

Councilman Harry Santiago was not mentioned negatively at all.

Where are we now? Santiago and Anderson have both decided not to run for reelection. Bailey won reelection in 2018 and isnt up for reelection until 2020. Mayor Capote is termed out as Mayor and cant run for reelection. He ran for County Commission Seat District 5 but was unsuccessful. David Isanrdi took a plea deal and had adjudication withheld. Aguiar’s case is still pending and he is facing over 65 years in prison, and is already a convicted felon.

It is unclear why Haridopolus is lobbying so hard for specific candidates but information is slowly coming to light. It is certainly something voters and residents should keep an eye on.