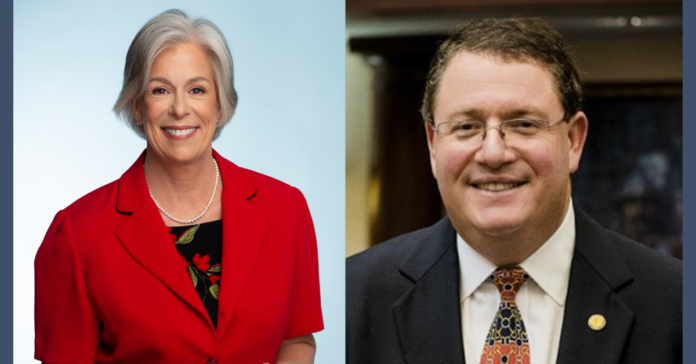 Adkins leads Fine by a 63 percent to 37 percent margin, according to a new survey conducted by local Republican organizations focused on Republican voters.

Adkins, a first-time candidate who has raised a respectable amount of money in a short amount of time during this pandemic, has consolidated the GOP vote in a way that Fine has not been able to do in his previous 2 terms. Since announcing in April, Adkins has raised $44,616 without holding a fundraiser, while in the same timeframe, Fine has only raised a total of $6,161 according to the latest campaign finance reports.

“Fine has enjoyed the comfortable seat of incumbency by default because Republicans haven’t had another choice. He’s never had to face a challenger before,” said Adkins’ political consultant Robert Burns, President of The Relentless Group.

“That’s reason true conservatives like radio host Bill Mick even advocated for voting for the Democrat in the race over Fine, because he’s that damaging to the party. Now they have a choice.”

Fine called Mick anti-Semitic and wrote a letter on his official State Letterhead demanding his termination from iHeart Radio.

Staying true to form, Fine who brags about being the bully on this hill spent the last month attacking. Not attacking Adkins, but attacking Burns who has been very critical of Fine over the last 18 months. Fine has held press conferences and paid for articles in the blog Florida Politics to specifically come after Burns. Voters have not responded well to this strategy.

Meanwhile, Adkins has hit Fine hard on his record. Most recently on his voting for the Parkland Bill which raised the age of buying a gun from 18-21 and increased the waiting period to 3 days. Fine got a lot of criticism from the pro-second amendment community over his vote and in-turn promised that he would present legislation to walk back the gun control measures he voted for previously. However, during the last session, Fine has not presented any bills related to gun rights.

Adkins has also gone after Fine on his attacks of local government, and taking money from the district giving it to the State’s general fund. Although he tried several times, Fine has not been able to get his bills promising $50 million in matching funds for restoration of the Indian River Lagoon passed.

He did however get a bill passed this year that increases the amount of fines taxpayers end up paying if there is a sewage spill. Those fines that come from tax dollars are again given to the State.

Adkins also points out that Fine does not live within his district as required by Florida law in order to stay eligible to represent it. Fine lives in a mansion in Melbourne Beach which is actually part of District 52. He has rented a small vacant condo in 53 to try and get around this requirement. Burns has filed an ethics complaint and voter fraud complaint, as Fine is registered to vote at the condo, yet he does not live there which is against voter registration laws.

Adkins says her focus will be to secure needed funding from the State in order to give local officials the resources they need to make the repairs that are a result of decades of neglect. She says she will focus on building relationships and collaboration with her peers instead of bragging about being a bully to them. She’s confident her approach will bear much more fruit instead of flies.

As mail ballots go out on Thursday, Fine has scrambled dropping tens of thousands of dollars on television ads, mailers, and campaign consultants. He has solicited the help of Anthony Pedicini from Tampa, and former Palm Bay City Councilman, and lobbyist Tres Holton.

But will it be enough?

So far it has netted him a series of failed campaign events, most notably his attempt to have the City of Melbourne host his 4th of July Fireworks event which the City decided not to vote on because of campaign finance and ethical issues the event presented. That lead to a slue of Facebook attacks by Fine on the Council and the Mayor calling them unpatriotic and protestors against America. Two of the Councilman are US Military Veterans.

With Election Day only 34 days away, Fine has publicly stated he will not participate in any debates or forums. Adkins has accepted all invitations from all outlets to date. She says “It’s important for voters to have the opportunity to get to know their candidates, and ask tough questions in real time. We owe it to our voters to make ourselves available.”

The next forum scheduled is this Saturday hosted by the Brevard Caribbean American Sports and Cultural Association. Florida Today will be holding their forum for this race on August 6th at 7pm. Fine declined the invitation to both.

Fine’s website is www.voterandyfine.com but is only a landing page for donations that says the webpage will be available April 2020.

The winner of the Republican Primary on August 18th will face repeat Democratic challenger Phil Moore. Fine defeated Moore in 2018 but ended up getting the lowest percentage of Republican votes than any other legislator in Brevard County.