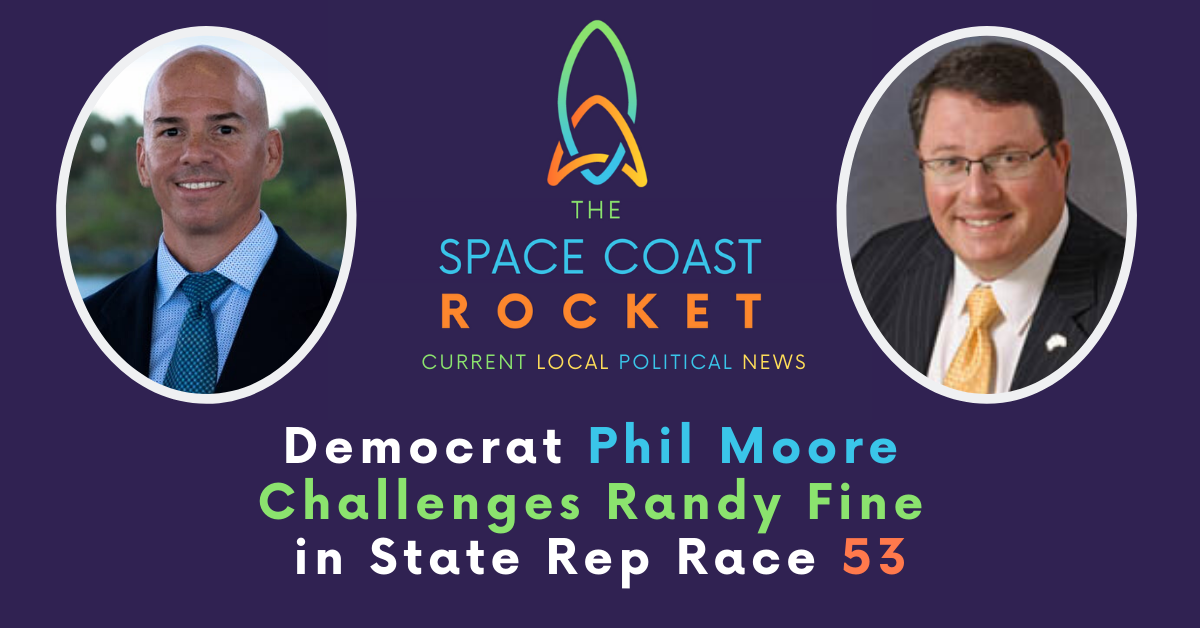 Palm Bay Democrat Phil Moore has officially filed to challenge incumbent Republican Randy Fine in what will be a heated re-match of last years race. Currently, each candidate has no challenger in their primary races.

During last year’s race, in the general election, Fine came out the victor by a margin of 10%. Fine received 55% of the votes to Moore’s 45%.

Voter registration in District 53 is relatively even between the Republican and Democratic parties with roughly 46,000 Republicans to 43,000 Democrats. The race will likely be determined by the over 36,000 non-party affiliated voters.

Fine is a retired businessman of a successful casino consulting firm known as the Fine Point Group. He lives in Melbourne Beach. For the 2018 election he raised $326,675 and spent $276,599 on his race; a cost of $6.56 per vote received.

Moore states the majority of Fine’s contributions come from outside of his district, not from his constituents, but from special interest groups from around the state and country. He says, “the lack of funding from inside the district and the amount of money Fine has spent is evidence that he’s not necessarily a strong a candidate, but is a wealthy one.”

Having learned valuable lessons from last years race, (his first time running for office) along with more competitive funding, Moore believes he has a clear path to victory this go-round.

The 2018 election year certainly had attacks from both sides, with Moore criticizing Fine for living outside of the district, and Fine exposing a history of traffic tickets. There’s no reason to believe this year will be any different if not more contentious.

Fine has proudly worn the reputation as a ‘bulldog’ in the legislature, and is no stranger to headlines in the media from comments made on the record as well as social media.

But Moore says that’s a problem and that Fine goes out of his way to bully local elected officials over made up and ‘trumped-up’ allegations in an effort to eliminate home rule. He believes that Fine is the primary source of divisiveness in the County, even within his own party.

“I’m not going to be a Representative of Brevard who divides Floridians with rhetoric of dissolving the City of Palm Bay or rhetoric of shutting down the biggest University in the State as Randy said last year.”

This year Moore says, “he is focused on listening to the voters and campaigning on being their voice in Tallahassee.”

Fine was asked if he would like to comment on the news of Moore running this year and declined.

District 53 generally includes all areas south of 192 to parts of Sebastian.