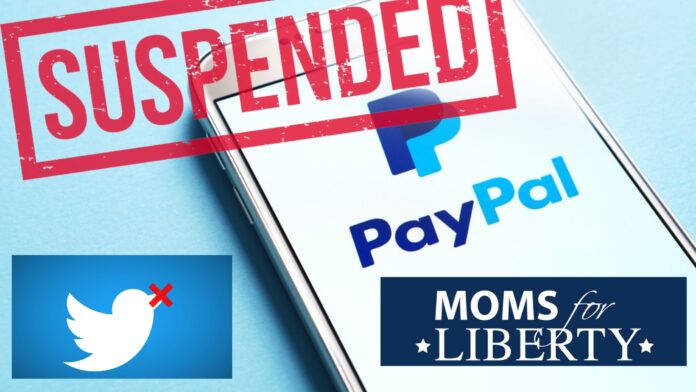 Moms for Liberty announced they were suspended from Twitter after sharing a tweet discussing a proposed California law seeking to restrict parental rights across the country.

Gender dysphoria is a mental health disorder that is being normalized by predators across the USA. California kids are at extreme risk from predatory adults. Now they want to ‘liberate’ children all over the country. Does a double mastectomy on a preteen sound like progress?” the Moms for Liberty Twitter account wrote in a tweet.

That tweet from the advocacy group featured another Twitter user’s post discussing proposed legislation in California, one seeking to circumvent parents and aid children who flee from other states because they cannot obtain “gender-affirming care” at home.

Moms for Liberty co-founder Tina Descovich announced in a press conference alongside Governor DeSantis that their PayPal account had been frozen as well. She stated that last year they handled over $300,000 in transactions with PayPal without issue, but following a press event this year, they received over $100,000 in donations and their account was frozen. She said the actions brought their organization to a screeching halt.

Tina stated that they are a 501(c)4 organization, and are still waiting on the IRS to process their application, but have been operating with PayPal and other vendors under the pending application. After PayPal temporarily disabled their ability to withdraw funds, Tina says they began transitioning to another platform to handle their finances and shipping.

She states that after their first National Summit in Tampa earlier this month, PayPal suspended their account indefinitely as well as the accounts of some of their donors, and have frozen over $4,000 in their account.

“A court of this state has temporary emergency jurisdiction if the child is present in this state and the child has been abandoned or it is necessary in an emergency to protect the child because the child, or a sibling or parent of the child, is subjected to, or threatened with, mistreatment or abuse, or because the child has been unable to obtain gender-affirming health care or gender-affirming mental health care, as defined by paragraph (3) of subdivision (b) of Section 16010.2 of the Welfare and Institutions Code,” reads the proposed law Moms for Liberty was alluding to in its tweet that violated Twitter rules.

The advocacy group’s account was prevented from posting new tweets, retweeting others’ tweets, or gaining new followers, among other features that were disabled.

Moms for Liberty was forced to delete its tweet and wait out a 12-hour suspension before any of these features would be enabled again.

Twitter has locked out *MOMS* fighting for their kids’ safety and educations against emotional manipulation because it wants to protect cult (and perhaps other types of) grooming and the ideological groomers deliberately engaging in it,” tweeted mathematician, author, and cultural critic James Lindsay, alongside alleged images of the suspension notices Moms for Liberty received from Twitter.

Tiffany Justice, the co-founder of Moms for Liberty, told National Review that she appealed Twitter’s decision.

My options now are to delete the tweet or appeal it. I’m not deleting the tweet. This is just madness and our children are paying the price,” she told the conservative news outlet.

This latest incident isn’t even the group’s first experience with social media censorship, the group alleges. Facebook flagged 22 Moms for Liberty chapter accounts for “community violation,” barring the accounts from “posting basic information about local government operations such as school board meeting times, or questions about student textbooks,” the group claimed in a January press release.