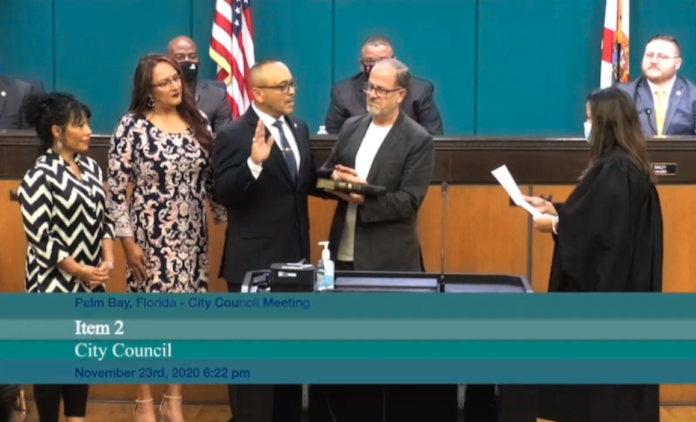 When the results of the audit were published, Representative Fine would post daily about each finding, but stopped once he got to findings that implicated his supporters like Tres Holton and fired Palm Bay City Manager Gregg Lynk.

The entire audit report can be seen here.

As a candidate, Mayor Rob Medina campaigned heavily using the audit results as the reason he needed to be elected to restore transparency and compliance with the law in the City.

One of the findings in the audit that Representative Fine chose not to highlight was Finding 24: Public Records Retention.

As we reported earlier, the Palm Bay Police Department opened a criminal investigation into the disappearance of text messages between Mayor Rob Medina and State Representative Randy Fine. That investigation is currently being addressed with the State Attorney’s office. Willful destruction of public records is a crime in Florida.

Mayor Medina has refused to answer questions on the record about the text messages disappearing. His only response to how the messages which he initially supplied went missing after they were also requested from Randy Fine’s office was that when he went to search his phone again, they simply were no longer there.

“You know, over the last several years, we’ve encountered some negative publicity. Come on. Can I be real?” newly elected Mayor Rob Medina asked, minutes after taking his oath of office during a Monday night special meeting.

Several citizens report that they have reached out to Medina directly over the issue and have stated that Mayor Medina will not respond in writing, and demands that if they want answers, to speak with him on the phone about it.

“We have to start with trust. Trust in government. Trust is not given. It is earned,” Medina said.

Representative Fine’s office responded to the request stating that there were never any records to begin with despite Mayor Medina initially providing them.

This happened several months before we recently reported the text message exchanges between Randy Fine and a West Melbourne City Councilman and the West Melbourne Mayor. When Fine found out that Councilman Dittmore was going to supply the text messages between them as part of a public records request, Fine directed him not to do so and to fire his city attorney for advising him to.

Fine was so outraged over the findings in the Palm Bay audit, that he threatened to try to have the city disbanded. Now it is him and the new Mayor who promised transparency and compliance that are the first to violate the findings in the audit itself.