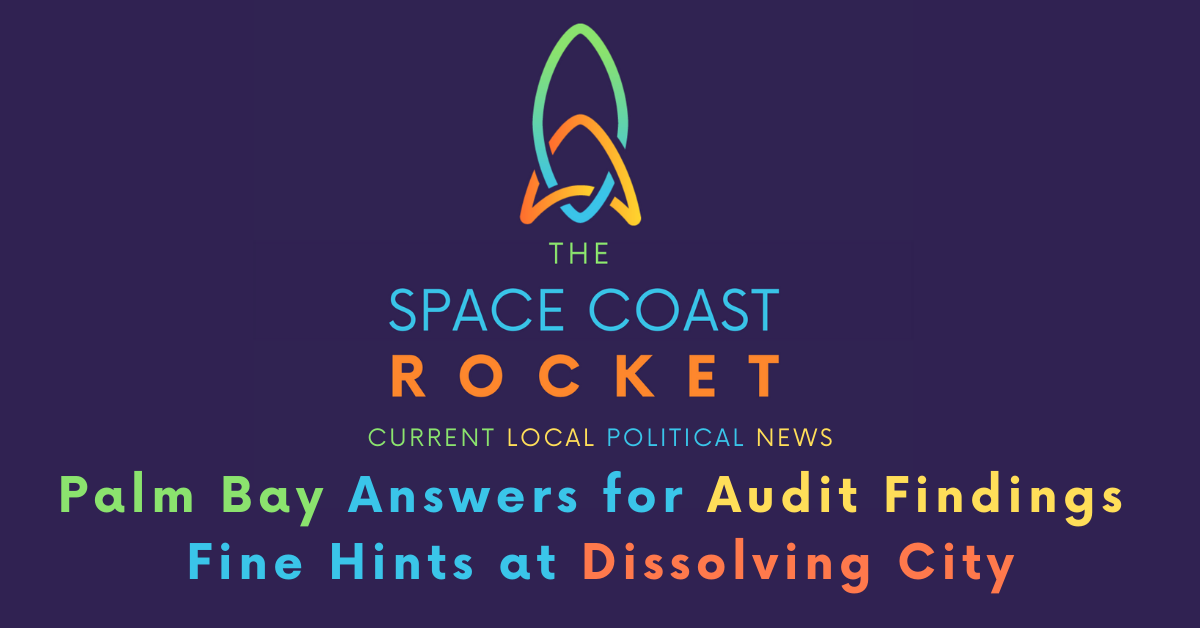 Today the JLAC held a hearing to discuss the findings of an 18 month operational audit of the City of Palm Bay. The audit was requested by State Representative Randy Fine and supported by Senator Debbie Mayfield, who at the time was the chair of the committee. Both were in attendance for todays hearing.

Representing the city was the new city manager Lisa Morrell who was appointed just over a year ago after last years election. Lisa was appointed as the interim city manager after the council voted 3 to 2 to fire then manager Greg Lynk. Lynk was the cities leader during the time frame that the 31 findings of the audit occurred. Newly elected Councilman Kenny Johnson was the swing vote in Lynk’s termination. The Mayor and Councilman Bailey voted in favor of the termination, while Councilman Santiago and Anderson argued for him to remain in place.

Her first week on the job, Mrs. Morrell “cleaned house” of some key leadership positions within the city management that were described as a cancer to the administration. Within a few weeks of evaluating her performance as the interim manager, Councilman Johnson made the motion to appoint her as the permanent manager and forgo the lengthy and costly nationwide search for someone new. This recommendation was supported by the council except for Councilman Bailey who wanted to go forward with the search.

Mrs. Morrell presented a written response to the findings and briefed the committee on corrective actions that were already under way and policies in the process of being written to address other administrative issues outlined in the audit. Senator Mayfield stated that Mrs. Morrell “walked into a hornets nest” and she was praised by her as well as other members of the committee for her handling of the situation to right the ship.

Notably absent from today’s hearing however was Mayor Capote. The chair of the committee took insult to the fact that he was not there and stated several times that even though the Mayor doesn’t care about his constituents, that he does. He also went on to say that the Mayor couldn’t find time to attend the hearing but found the time to insult the committee and its work. He did no state specifically what he meant by that, but held up a piece of paper while making the statement.

Also not present for the hearing was Councilman Johnson who is the newly appointed Deputy Mayor. Mrs. Morrell had stated that she believed Johnson had intended to attend the hearing. Representative Fine also brought up the absence mentioning that he knew Johnson was present in the Capitol representing the Space Coast and Florida League of Cities. Johnson could not be reached for comment.

Of the 31 findings presented by the audit, 2 dominated the discussion. The first being the St. John Heritage Parkway interchange. FDOT completed the $28 million dollar interchange a few months ago however, Palm Bay has yet to complete their connecting road to the interchange. As of now the interchange remains closed, but according the city manager should be opening very shortly.

The problem is that under previous council and city leadership, a deal was made with the developers to pay for the connector road at a cost of approximately $16 million. However, no contract or written agreement can be found and ultimately the city ended up paying for the road instead of the developer. Lisa Morrell stated plainly that she cannot answer for that and wants an answer herself.

Representative Fine stated that the developer requested that the connector road be moved north in exchange for the $16 million, but no attempt was every made to collect the money by the previous leadership. Both Santiago and Anderson were on council when some of these decisions were made. Both stepped to the podium this afternoon to address the committee but neither was asked questions specific to interchange during their tenure by Fine or the committee.

Councilman Bailey however, took the opportunity to voice his opposition to most of the contentious decisions that were made during the development of the project. The parkway itself passed with a 3-2 vote. He said he is grateful that the audit has brought to light some of his reservations and reasons for voting the way he did.

Senator Mayfield suggested to Lisa that they hold up permitting on any future developments by the developer until their side of the agreement is upheld. Lisa stated that although some of the construction is already underway, that it is something she is considering for future construction along with other enforcement actions.

One committee member stated that in his mind it looked like a coverup. Between the non-explanation for the missing payment of the money from the developer and a lack of proper public record retainment in some cases (another finding in the audit), it seems like someone was trying to hide something. The auditor however disagreed and stated that it looked like more of a lack of policy for the proper retainment of electronic public records from cell phone text messages, etc.

He also brought up the finding of the management increasing their purchasing authority from $25k to $100k. The audit found this amount to be high in comparison to other cities of similar size. He also stated that an increase like that doesn’t just happen without talking to someone, and there was likely some violation of Sunshine Laws in order for this to take place.

These assumptions are not without merit in that several administrators that are no longer with the city were all subjects of a federal investigation into Palm Bay’s leadership. The former Deputy City Manager David Isnardi (husband of Brevard County Commissioner and former Palm Bay City Councilwoman Kristine Isnardi) and City Attorney Andrew Lannon both resigned during the timeframe of this audit. David Isnardi was eventually arrested and charged on several felony counts alleging to corruption and bribery. Another finding in the audit was a payment of thousands of dollars made to Isnardi upon his resignation authorized by Lynk allegedly without legal authority to do so. Lynk was also questioned for his actions in this investigation, but as of now has yet to be arrested or charged for any wrongdoing.

Also a subject of the investigation was former City Councilman Tres Holton who was defeated by Johnson in last year’s election. Holton was a strong advocate for the parkway project and has served recently as a lobbyist for one of the major land owners involved with the project. Holton has also not been charged.

As a consequence of these actions and lack of proper documentation and records, Lisa Morrell is advocating for a forensic audit to take place of this specific project to try and finally get some answers.

Another finding highlighted by Fine was a $300k phone bill to the city. Fine alleges corruption and “theft” by one city employee using his city issued cell phone for international phone calls while on vacation in Jamaica and other unofficial uses. That employee was also the City Manager, Greg Lynk.

The Mayor’s city provided vehicle was also a highlighted topic of discussion. The audit found that the city did not have a policy in place to authorize a vehicle for use by the Mayor and did not require typical record keeping for it’s use. It also notes that once he was issued a vehicle, his allowance for expenditures did not go down to compensate for having a city vehicle to use for official business instead of his own. Morrell states that since then the policy has been put in place and that the vehicle is available to be “signed out” by any member of Council for official business.

Fine asked if since then the vehicle had been turned in by the Mayor or not and she stated no. He also made a point to emphasize that the vehicle was red in color and had no city markings. Mrs. Morrell stated that most city vehicles are white or grey in color but it is not unusual for them to not have city markings on them, as the vehicle assigned to her office does not either.

The committee had several questions for the City Attorney Patricia Smith, but because of time constraints were not able to address them in the hearing. The chair stated that questions will be submitted in writing to Mrs. Smith to be addressed at a later time. Also present was the final Charter Officer Terese Jones, the City Clerk. She was not questioned during the hearing.