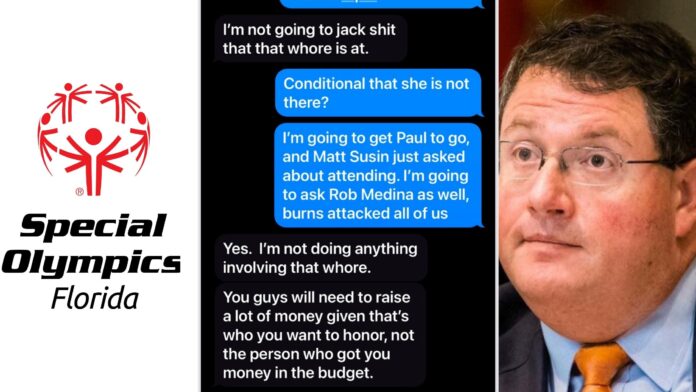 Editors note: As the owner of this publication, this article is an editorial written by me and I will be referring to myself in it. The text messages embedded in the article may be found extremely offensive to many readers.

A now deleted Facebook post by West Melbourne City Council Member John Dittmore sparked outrage from myself and other members of the public, related to a fundraiser for the Special Olympics.

Because of my investigations and history with Randy Fine, suffering the same attacks from him personally, I knew exactly what was going on behind the scenes. It is consistent with Randy’s behavior with other local elected officials to include Palm Bay Mayor Rob Medina. More on that later.

Eventually Dittmore deleted the above post. The problem stemmed from the West Melbourne Police Department when they invited school board members to participate in a fundraiser they were sponsoring to raise money for the Special Olympics.

School Board member Jennifer Jenkins was the only member to respond and agreed to participate in the event. She made a post on her Facebook page asking people to donate to the cause. The theme for the fundraiser was that participants needed to raise ”bail money” in order to be released from jail on the rooftop of Chick-fil-a in Palm Bay. When asked why Jenkins wanted to participate in this fundraiser, she stated that ”The Special Olympics has always had a special place in my heart, working with students with disabilities for years as a speech language pathologist.” She said she “was hopeful spinning a negative (Randy’s hashtag Jail Jenkins Facebook posts) into a positive would help raise the much needed funds for the children.”

Her participation was the impetus of Dittmore’s Facebook post, apologizing to Randy Fine, and thanking him for the funding he secures from the State of Florida for the City of West Melbourne. It turns out that the apology was not enough to satisfy Randy. He informed Dittmore that the appropriation bills he had secured funding for for projects in West Melbourne would now be vetoed, as well as any funding for the Special Olympics. Simply for Jenkins’ participation in raising the money.

As of now, Jenkins has managed to raise more money for the annual fundraiser than any prior participant in the past. $500 is the goal and as of this writing, she has exceeded $3,000.

Dittmore pleads with Randy and tries to blame the mistake on a low level police officer who didn’t know any better of the politics of inviting Jenkins to participate. He then states he will replace the money Jenkins would have raised, and asks Randy to participate with him.

Randy responds with ”Im not going to do jack shit that that whore is at.”

He goes on to say ”You guys will need to raise a lot of money given that’s who you want to honor, not the person who got you money in the budget.”

A public records request was submitted to obtain the communications between Fine and Dittmore. During this entire exchange, Fine was on a cruise with his family and not able to speak on the phone which is the reason for the text messages instead.

When Fine found out about the public records request, he instructed Dittmore to fire the attorney that told him to release them, and not release them. Dittmore did neither and released them anyway.

The total amount of funding for the Special Olympics fine says he was cutting was $1,000,000. He also said he was going to cut $460,000 for West Melbourne Flood Prevention.

The full exchange is below.

Dittmore states in the exchange that Matt Susin invited himself and also invited, Paul Alfrey, and Rob Medina because I ”went after all of them” on the Facebook exchange. Matt and Paul both made comments on Dittmore’s post. What he is referring to is that Dittmore made the claim that it was his belief that individuals with past financial issues should not be trusted by the public to manage tax payer funds. He was referencing a school board race specifically.

I responded that he supported both Mayor Alfrey and Medina, who are the mayors of the 2 largest cities in the County, both of which have either multiple foreclosures or bankruptcies in their recent past. School Board member Matt Susin also had thousands of dollars in unpaid child support according to the Brevard Clerk’s website which records show he recently paid once it became public knowledge.

The text messages show that Dittmore was going to bring them all to the fundraiser since I went after them. I was at the fundraiser and none of them showed except for Dittmore. Fine advised Dittmore to cancel the entire event and apologize for getting invovled with politics.

This isn’t the first time Fine has instructed lower level elected officials to delete public records between them. Last July, a records request was sent to Palm Bay Mayor Rob Medina requesting messages between him and Randy Fine related to Fine’s involvement in Palm Bay’s resignation of Jeff Bailey and his replacement.

Medina provided recreations of the messages by forwarding them to another phone, then taking screen shots from that phone. When it became obvious that these messages were not in the original format, which could allow for some of the records to be hidden, the request was made for the ORIGINAL messages. Mayor Medina responded with ’the records no longer exist.” Fine’s office responded that there were no records to begin with.

Mayor of Melbourne Paul Alfrey has similar responses to public records request involving Randy Fine stating during city council meetings that records exists, but when a records requests is made for said records, ”they no longer exist.”

Fine has made it a badge of honor to threaten elected officials by withholding money for the projects for their cities if they do not ”honor him” or bend to his will.

The problem is that his actions may be a 2nd Degree Felony according to Florida Statute 838.021.

Also of issue is the destruction of public records which is a crime itself. It will be completely up to the State Attorney’s Office of whether or not to file charges and hold Fine accountable for his actions. The hornet’s nest has been kicked, let’s see who will get stung.