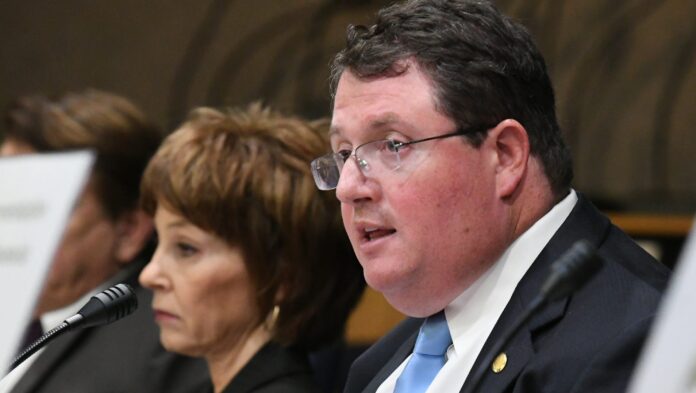 In 2016, political newcomer Randy Fine was elected in Brevard County to the state House and he won a second term in 2018.

Fine, who has run on the mantle of being a conservative Republican, faces a primary challenge from Marcy Adkins on Tuesday.

But the challenge against Fine hasn’t just come from his primary opponent. Instead, it has arisen, in part, from other Republican officials and party leaders.

In 2018, the Liberty Network released its legislative scorecard and gave Fine a “D-” grade.

“His votes show he is part of the problem, not the solution,” said Snitker.

On the current state budget, the RLC insisted  Fine “supported another record of spending and made no meaningful attempt to reduce the size of government.”

White said that there were proposals for $235 million sales tax holidays for Florida consumers, but Fine voted for a package that dwindled that total down to $47.7 million.

“Fine received a C grade on the RLC Liberty Index. That hardly qualifies him as a champion of liberty, or even as a dependable conservative for that matter,” said White

Another issue that has conservatives are hitting Fine on is guns.

In 2018, Fine, along with other Republicans in Tallahassee, supported a gun control proposal that raised the age from 18 to 21 for anybody wanting to buy a gun. The proposal also included a three-day waiting period.

“This really ticked us off,” said one member of the local Friends of the NRA. “He campaigned in 2016 telling us he supported gun rights then pulled this stunt.”

Florida Daily reached out to exhibitors of the Melbourne Gun show that takes place at the local auditorium.

Some of the gun sellers said Fine sold them down the river with his stance on gun control.

After being confronted about his vote, according to White and other members of the RLC, Fine promised them that he would sponsor legislation to repeal the gun control law he voted in favor of.

“He did nothing of the kind and, instead, made excuses. He broke his promise again. This alone is enough to disqualify him from reelection,” said White.

Florida Daily reached out to Fine and asked him about criticism from some of his fellow Republicans on spending and gun control.

“They are wrong,” Fine told Florida Daily. “I fought for legislation this session that would eliminate churches with schools as gun-free zones and have been one of the most aggressive fighters against Democrat efforts to ban certain types of guns and ammunition.   As for government spending, no one in budgetary leadership proposed more cuts to their budget than I did; and I have never supported a tax increase.”

Local Republican leaders have also had problems with Fine.

“I can think of a hundred different people off the top of my head I think would be a better representative than Randy Fine,” said Rick Lacey, the chairman of the Brevard Republican Executive Committee (BREC).

Lacey isn’t the only person on the committee who criticized Fine.

“This Republican (Fine) makes it difficult for us to defend some of his positions. If he voted like a conservative then it would be no problem,” a BREC member told Florida Daily.

In July 2018, Fine called for a criminal prosecution against County Commissioner Curt Smith, a Republican, for using his elected position to run for office.

Archer said he objected to Fine’s characterization of him and Ivey.

“On elections by endorsing or supporting local candidates for elected office, your use of that term is used to cast a negative spin on our participation in the political process,” Archer fired back.  “I find it most curious that you criticize us for endorsing candidates when in fact you actively sought and used an endorsement from Sheriff Ivey in your own ‘local’ election. Apparently, ‘meddling’ only matters when the endorsement is not of value to you.”

Back in April, a local liberal publication posted a Facebook thread where Fine called Archer worthless in his role as a state attorney.

Another clash took place over the summer when Fine offered to help pay for Melbourne’s July 4th fireworks show.

The city turned it down. City Attorney Alison Dawley explained that acceptance of a donation from Fine would possibly violate campaign finance laws and put the city of Melbourne in an ethical dilemma.

Hundreds of Fine supporters took to Facebook and complained about the city not having the fireworks display.

Fine said he was disappointed that the council didn’t take him up on his offer and added that there might have been a “racist undertone” with their decision not to have the fireworks.

Thomas, a 23 year Army veteran who served as an officer, said that Fine continued to attack him and his patriotism for not holding the fireworks show. Thomas, who is involved with local high school students promoting military service, said he was stunned by the attacks from Fine.

“It’s disappointing that such a smart and talented politician as Rep.  Fine gets his feelings hurt so easily. Despite Rep. Fine’s desperation to have a fireworks display paid for and named after his campaign, I was not willing to risk the reputation of our city being compromised,” said Thomas.

Thomas took to Facebook, urging Fine to attends the city council’s Veterans Day celebration “and discover what real patriotism is all about.”

But this isn’t the first time Fine has raised the issue of prejudice with his opponents.

In January,  the Brevard County Republican Liberty Caucus held a gun forum that was moderated by a local conservative radio host who in the past has had disagreements with Fine. Fine has called that radio host an “anti-Semite.”The event was packed and was attended by elected officials including Ivey.

When asked about the event, Fine posted that anybody attending that event was an “anti-Semite.”

“So Fine is calling all the pro-Second Amendment people who attended the event, including the local sheriff, ‘anti-Semitic,’” said White.

“I question his character,” said Brevard County Clerk of the Courts Scott Ellis, a Republican, about Fine.  “The guy is despicable.”

In September, Fine posted on a Facebook page, accusing Ellis of “allegedly” approving the use of using a racial slur when commenting on a high-speed police chase that was in the news.

The controversy made local headlines and blew up all over Facebook as Fine continued to double down on his accusations.

But Fine later backtracked and admitted that he never heard Ellis use the slur. Instead, Fine said he heard “others” who said they heard him use it.

“Mr. Fine did not simply take my written words out of context, he edited the comment to satisfy what he desired and then attacked his own modified comment,” said Ellis.

Asked about his accusations, Fine did not back down on the matter.

“I am not afraid to call balls and strikes.  If someone is an anti-Semite, I am going to call them out for it.  Unfortunately, there are many out there, starting with my opponent, who stated that Jews do not believe in God and literally quoting Hitler, said I was a ‘pest’ that should be ‘exterminated,’” Fine told Florida Daily. “The fact that there are so-called Republicans who support her – and this – are an embarrassment to our party and make it more difficult to convince the 65 percent of Jewish Floridians who did not support Governor DeSantis in 2018 to support President Trump in 2020.

“When Democrats say Republicans don’t like Jews, people like Marcie Adkins and her supporters prove them right,” Fine added.

While Fine has his critics, he also has his supporters. Hundreds of Followers on Fine’s Facebook pages praise him for legislation he has sponsored. Members of the pro-life community have backed Fine during his campaigns. Local evangelical church leaders have praised Fine for his support of Israel.

“Rep. Fine has been a true champion in supporting independent, neighborhood pharmacies as they fight to survive in a monumental battle against secretive and anti-competitive marketplace practices.  As a businessman he understands better than most what an un-level playing field is when he sees it,” said Bishop.

Fine also has the support of the GOP leadership in the state House and from the Florida Chamber of Commerce. Local environmentalists and conservationists have applauded Fine for his environmental accountability bill which was signed into law by Gov. Ron DeSantis.

Fine has generated buzz as a potential candidate for higher office but he dismissed those rumors.

“I am focused on getting reelected to my job as state representative; nothing more.   I am excited to hopefully have four more years where I can keep fighting for the people of South Brevard,” Fine told Florida Daily.