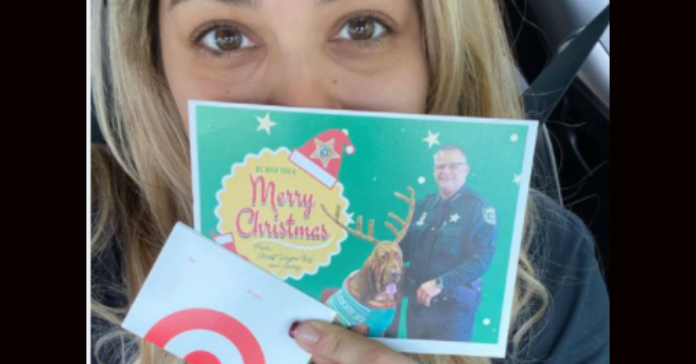 Several Facebook posts today showed citizens posting photos of gift cards and christmas cards they received from Brevard County Sheriff Deputy’s after being pulled over in their vehicles.

The individuals’ posts stated things like, “I got pulled over for wearing my seatbelt and going the speed limit. The cops gave me a Christmas card and a Target gift card.”

The comments under most of the posts were a majority positive. However, on some posts, citizens raised many concerns with this practice, and even the legality of it.

An attorney commented, “This is literally a constitutional violation. The government can’t stop someone without reasonable suspicion that criminal activity is afoot and that person is involved. What if someone has a heart attack for fear that something will happen to them or get fired from their job for being late? It comes out of our pockets.”

Others pointed out the stress involved in a traffic stop, and the safety risks it puts both the officer and the citizen at. Law enforcement constantly reminds citizens of how dangerous a traffic stop is, and how unpredictable the person being stopped can be with an infinite amount of possibilities that can take place.

During the past decade, traffic stops have been a leading cause of death for police officers, according to the National Law Enforcement Officers Memorial Fund in Washington.

It was suggested that the deputy’s simply hand out the gift cards at the store to individuals walking up.

BREVARD COUNTY SHERIFF’S OFFICE “MOTOR UNIT” SHARES CHRISTMAS CHEER WITH BREVARD COUNTY DRIVERS!!Starting early this morning and throughout the day I had the pleasure of riding with our Brevard County Sheriff’s Office “Motor Unit” on what may have been one of the most rewarding and fun days of my 40 year career!!

Thanks to an amazing partnership with local business owner, Andy Pargh of the “Pargh Foundation,” throughout the day our Motor Unit handed out one hundred Gift Cards in the amount of $50.00 each to unsuspecting motorists who were doing it right by obeying all of Florida’s Traffic Laws. Today, our Deputies were looking for the opposite of what we normally look for as throughout the day we were watching for those wearing their seat belts instead of not wearing them, those who were obeying the speed limit instead of exceeding it, those who had their children safe and sound in approved child car seats, and of course those who were not being distracted while driving.

During the interactions our Deputies gave the driver of the vehicles a $50.00 Gift Card to either Publix, Wal-Mart, or Target while thanking them for partnering with us to keep everyone safe during the holidays!! The various responses from the drivers was overwhelming as they ranged from tears from those who truly needed some extra help to make ends meet at Christmas time, to those that had just this morning, become homeless!!

Everyone was extremely grateful for the kindness of the donor and even a couple of the recipients pledged to pay the gesture forward to help others in a time of need!!I would like to personally thank Andy Pargh and the “Pargh Foundation” for partnering with us to make today possible and for all the foundation does to help our community!! I would also like to thank our “Motor Unit” for spending the day with me on this very worthwhile cause and for all they do each and every day to keep our streets safe!!