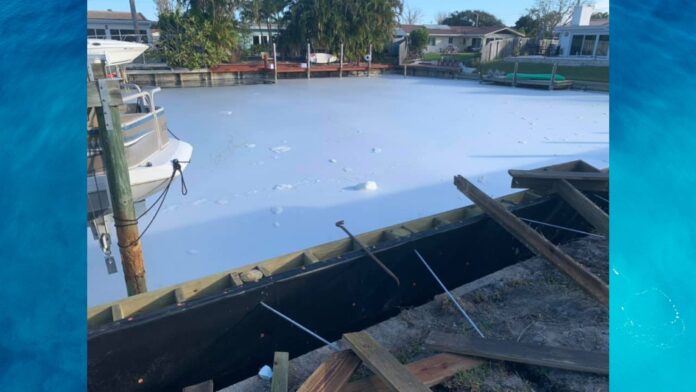 Cocoa Beach resident Max Brophy from Custom Docks, posted 2 photos today from a job site he was working on.

The photos are pictures of the Indian River Lagoon from residents back yards.

Max says “I work marine construction , Over the last five years I have seen a steady decline with our waterways. From bacterial infections , waterways that lack oxygen(Fish kill). Steady runoff from pesticides/ Dark water being freely dumped /Spilled. The constant mercury rises and falls making every fish you catch and eat a shot in the dark . A lot of guys are getting sick just working in it. I’d advise to stay out of the water.”

The water, covered in foam, makes it appear as if the lagoon had frozen over. It hasn’t. So what has caused this?

A local non-profit, Fight for Zero is a grassroots team that raises awareness of water quality issues, shares environmental health education, crowdsources medical diagnoses, and creates resources for communities throughout Florida. From their website, they address the foam issue saying:

This can result from plants decomposing, too much phosphorus in the water, temperature rises, soil erosion events, and human activities.

If entities release material (such as fire fighting foam) to a water body in large quantities, it can cause foaming. PFAS foam rests on the water’s surface and can be identified as sticky, bright white, usually lightweight, and tends to pile up like shaving cream. Foam can have much higher concentrations of PFAS than the waterbody it is found in.

• Foam from human activity usually appears white, gives off a fragrant (perfumed or soapy odor), and usually occurs over a small area, localized near the discharge source.

• Natural foam usually appears as light tan or brown, smells earthy (fishy or has fresh cut grass odor), can occur over large areas and accumulate in large amounts, and dissipates fairly quickly, except when agitated (as in high wind and rain conditions).

Foam can be a risk to your health if it contains harmful bacteria or PFAS. It is not recommended that you swallow the foamy water or allow your pets to come into contact with it.

Stel Bailey, the Executive Director for Fight for Zero has reached out to several elected officials including State Representative Randy Fine who has been most vocal about the lagoon, and makes it part of his campaign.

Bailey’s organization sent an email to Fine’s office in November about dangerously high levels of PFAS in Palm Bay’s drinking water. She states her email went unanswered or addressed in any other way. In a facebook post on December 4, 2020, Fine states he never heard about PFAS levels in Palm Bay’s water.

Fine’s comments are troubling because Bailey also shared an exchange from 2019 between herself and Fine when he messaged her to ask her to remove a citizen from a Facebook group she administers. When she did not do what he told her to do, he messaged her to never contact him again. That is likely the reason she received no response to her email about the PFAS levels in Palm Bay.

To his credit, Fine has tried and failed multiple times to get legislation passed to bring funding from the State to help the lagoon. Although he failed to bring money to the County, last year he was able to pass legislation to increase fines for sewage spills by local municipalities. Those fines which are paid by the residents, are then sent to the State for the legislators to do with the money as they see fit.

None of the money from the fines is used directly towards fixing whatever caused the spill to occur.

A sewage spill in Titusville just before Christmas has brought the issue back in the news. Bailey has organized an event to demand action.

Up to date information on what measures and projects are currently in progress and projected can be found at https://onelagoon.org/.