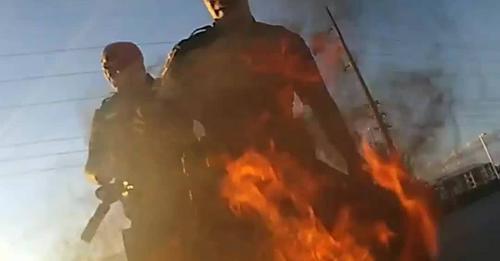 The Osceola County Sheriff’s office released body-camera video Friday showing the moment a deputy’s Taser set off a fire at a gas station, injuring other deputies and their suspect.

It shows exactly what happened to Jean Barreto at an Orange County gas station in February.

Barreto had been driving his bike recklessly before finally stopping at a gas station to get more gas. He was then tackled from his bike by a deputy.

The deputy can be heard yelling for the gas pump to be turned off before firing a taser, sparking a ball of flames near the gas pump.

Both the deputy and Barreto were badly burned.

According to the fire marshal’s report from the explosion, two of the deputies at the scene suffered minor injuries, while a third experienced third-degree burns.

“The most probable cause of the fire was an electric discharge from the deputies deploying a department-issued taser device,” the report said.

Osceola County Sheriff Marcos Lopez said it is against policy for Tasers to be used around flammable substances.

Thursday it was announced that the Osceola County deputy who fired his taser, would also be charged.

The attorneys representing the motorcyclist who was caught in an explosive gas station fire after a Florida deputy sheriff tasered him while he was pumping gas say that their client was “cooked alive”.

NeJame Law offices in Orange County, Florida, describe how Jean Barreto, 26, sustained third-degree burns after the February incident where officers had tackled the man from his bike while he was filling up his motorcycle, suspecting that he was a member of a biker gang that had been called in earlier for harassing other drivers.

“While being cooked alive, Mr Barreto sustained third-degree burns on approximately 75 per cent of his body, front and back from his feet to the bottom of his neck,” the release said, according to the Orlando Sentinel.

Deputy David Crawford faces a charge of misdemeanor culpable negligence because, Lopez says, he knew there was flammable liquid where he was aiming the taser.

Despite Deputy Crawford being charged, Sheriff Lopez said he didn’t see any other approach his deputies could have taken because Baretto was ignoring all commands to stop.

“We’re gonna take action based on what we have, and we risk our lives every day to apprehend suspects,” Sheriff Lopez said. “The way he chose to do it that day was his choice.”