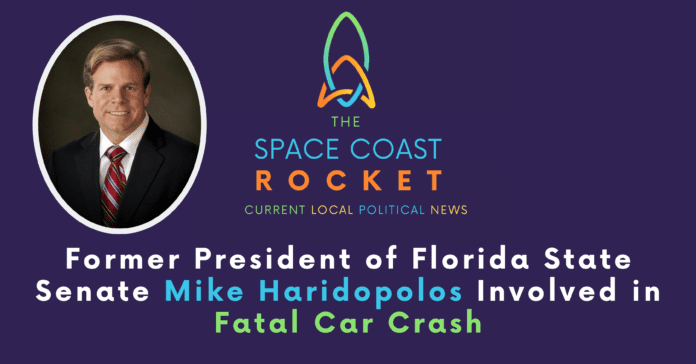 MERRITT ISLAND, Florida – Former President of the Florida State Senate, Mike Haridopolos, was involved in a fatal crash that occurred on Pineda Causeway near the intersection with South Tropical Trail on Merritt Island, Florida on Monday, November 11, 2019.

A 66-year-man from Satellite Beach, was standing in the roadway for an unknown reason.

According to the Florida Highway Patrol, when Haridopolos changed lanes to avoid the pedestrian, the Satellite Beach man moved into the direct path of the Land Rover.

That’s when the front of the Land Rover struck the pedestrian.

As the Satellite Beach man came to a final rest on the roadway, he was struck again by a 2008 Ford Taurus driven by Korine Vining of Satellite Beach.

Both Haridopolos and Vining were wearing their seatbelts and not under the influence of alcohol at the time of the crash, FHP reports show. Neither suffered any injuries from the crash.

The pedestrian’s name has not been released by FHP pending next-of-kin notification.

A toxicology report is pending for the Satellite Beach man.

The crash remains under investigation.