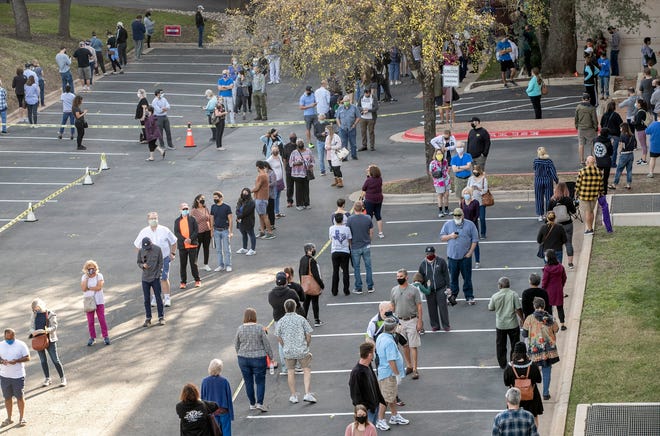 Florida Republicans are considering a bill that would effectively make it a crime to give voters food or drink, including water, within 150 feet of polling places.

State law currently prohibits campaigning within 100 feet of polling locations, but an elections bill introduced last week, H.B. 7041, expands that zone to 150 feet and includes a prohibition on giving “any item” to voters or “interacting or attempting to interact” with voters within that zone.

State Rep. Blaise Ingoglia, a Republican from Spring Hill, said in a committee meeting last Monday that the ban would include “food or beverages.”

The proposal is similar to a measure in Georgia’s sweeping new election law that bans giving water, food or gifts to voters waiting in line, among many other restrictions. President Joe Biden, in condemning Georgia’s law as “outrageous” and “Jim Crow in the 21st Century,” singled out that provision as evidence of suppressive intent in a state he flipped blue for the first time in decades.

Trump won Florida in 2020, but that hasn’t stopped Republicans from pursuing a spate of election-related bills. Many of the bills under consideration target mail voting and drop boxes, a longstanding method for voters to return ballots that the former president attacked without evidence as inherently fraudulent. Florida Gov. Ron DeSantis, a Republican, advocated for new mail voting restrictions last month.

The state has allowed all voters to vote by mail for more than 15 years.

H.B. 7041, which was recommended by an elections committee last Wednesday along party lines, is 44 pages long and contains a number of other election restrictions. It would require voters to request mail ballots more frequently, add more identification requirements for mail voting, and limit how drop boxes are used.

Introducing the bill last week, Ingoglia said that Florida’s 2020 election was a success but that the system could still be improved.

Graham, a close ally of former President Donald Trump, made the remarks during an interview with Fox News Sunday host Chris Wallace.

“And this is the one that I think is creating the biggest fuss. It prohibits—it makes it a crime—to give food or drink to voters waiting in line. Senator, why on Earth—if Americans are willing to wait in [line] hours to vote, would you make it a crime for people to come and give them a bottle of water?” Wallace asked Graham.

“All I can say is that that doesn’t make a whole lot of sense to me. I agree with you there,” Graham responded.

However, he quickly pivoted to raise concerns about the “explosion in mail-in balloting” that Georgia saw in the 2020 election. Graham did add that people “can go to court and stop” what is happening in Georgia if they don’t like the new legislation.