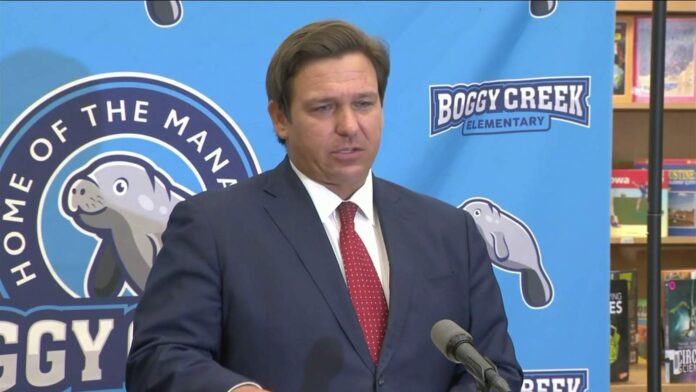 In his first public press conference since the November 3rd election, Gov. Ron DeSantis said Monday that he will not be implementing a statewide mask mandate.

Florida has averaged more than 8,500 new coronavirus cases a day the past 2 weeks, the highest rate since late July.

DeSantis maintained his opposition to issuing such mandates.

“How has that worked out in the states that have done it? Has that stopped an outbreak in Minnesota, Illinois, Michigan. What about New Jersey? What about all these states where you have an explosion in cases?” DeSantis replied. “So, I mean, at some point, does the observed experience matter? I’m opposed to mandates. Period. I don’t think they work.”

“People in Florida wear them when they go out, they don’t have to be strung up by a ban to do it,” DeSantis said.

He said that instead of focusing on scaling back, he’s been working on preparing for vaccines.

“We could potentially have out of 40 million doses by the end of the month, that’s 20 million people, Florida’s share would be at least a million maybe as much as 2 million. If you’re applying that on key areas, that’s going to make a big, big difference,” DeSantis said.

DeSantis called the closure of schools during the coronavirus pandemic “probably the biggest public health blunder in modern American history.”

DeSantis said that schools in Florida will remain open this spring, but parents will continue to have options for virtual learning.

DeSantis went on to say he will not impose further restrictions on businesses that could lead to layoffs or financial loss.

Mayors in South Florida, both Republicans and Democrats, disagree with DeSantis and want to be able to enforce the guidelines and restrictions that help to save the lives of the most vulnerable people in their communities.

State Representative Randy Fine who claimed to have Covid himself this year stated in several facebook posts that masks work, but a mandate to wear masks doesn’t work. He did not offer any explanation to his logic beyond that.

Fine also stated to Spectrum News 13 that he supports DeSantis’s recent executive order, which blocks municipalities from imposing fines or penalties for disobeying local ordinances, such as mask requirements.