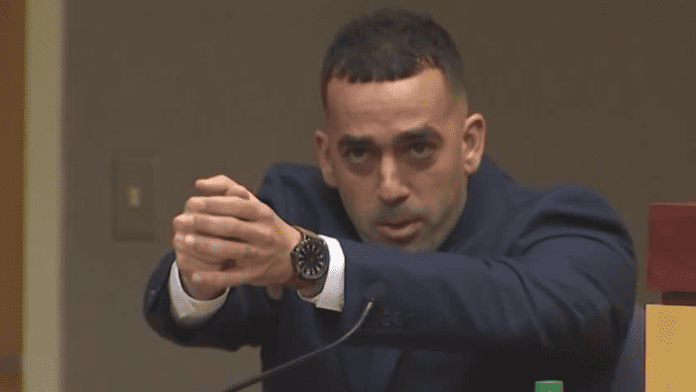 Brevard County Sheriff Deputy Yousef Hafza was charged with murder after a 2016 road rage incident in Palm Bay on father’s day. After cutting off a vehicle, Hafza said it followed him for 4 miles to the end of Emerson Rd and Heritage Parkway. That’s when he says that passenger, 25 year-old Clarence Howard, and driver Jose Montanez, Howard’s brother in-law exited their vehicle.

Hafza, who was off duty at the time of the shooting, claimed that Howard ran toward him and threatened him while making a reaching motion, prompting him to shoot in what he said was self-defense. Jose claimed that as soon as they got out of the vehicle, Hafza began firing his weapon. Jose ducked behind the vehicle was not hit. Howard died from his wounds.

Records show that Hafza never identified himself as a law enforcement officer, and immediately fled the scene after the shooting. Hafza called 911 about one minute after leaving the scene and reported the shooting while en-route to his former wife’s home. He told the 911 operator that the men were attempting to get into his vehicle and were at his door, however evidence a the scene showed the shell casings form his firearm to be 50 feet away from where Howard was fatally wounded.

Sheriff Wayne Ivey had said on the day of the shooting that Hafza claimed self-defense. BCSO said that Hafza has been with them since November 2015 and is assigned to their West Precinct Patrol. He has previously served with the Palm Bay Police Department, Orange County Sheriff’s Office and the West Melbourne Police Department.

The shooting was investigated by the Florida Department of Law Enforcement, and after several weeks, Hafza was arrested and charged with 2nd degree murder, and attempted 2nd degree murder. During the trial, Hafza resigned form the Sheriff’s Office.

After pleading not guilty to the charges, Hafza later argued for the charges to be dropped citing Florida’s stand your ground laws. He stated to the judge that he feared for his life. After the hearing, the judge did not grant Hafza’s defense, and the trial went on.

The shooting sparked several protests in Palm Bay, and a make-shift memorial was erected at the scene in Howard’s memory.

During the trial, Hafza’s ex wife testified that he had more road rage incidents than she can count.

In May 2021, the hearing concluded and the jury came back with a not guilty verdict after deliberating for 4 hours.

After the verdict, Hafza told FOX 35, “The feeling is unreal. It’s hard to describe. It’s terrifying waiting for that verdict, but the feeling was so good. It was just finally.”

Yousef celebrated at home with his family.

“Everybody was just excited and happy. I slept really good for the first time in a long time. It’s been very difficult.”

Yousef said he should never have been arrested.

“Honestly, face the elephant in the room. I think it was political pressure and unfortunately, I paid the price for it.”

His attorney Barker said, “I think the jury did a great job in being able to separate what’s happened in other places and taking other cases where there may have been bad conduct by police and saying well that’s separate.”

We asked, “So, are you gonna go back to the Brevard County Sheriff’s Office?” He said, “Yes that’s already been discussed. And it’s already in the works. I just want to get back to what I love to do. That’s serving the people and doing what I do best.”

Last month, he was re-hired to the Brevard County Sheriff’s Office.