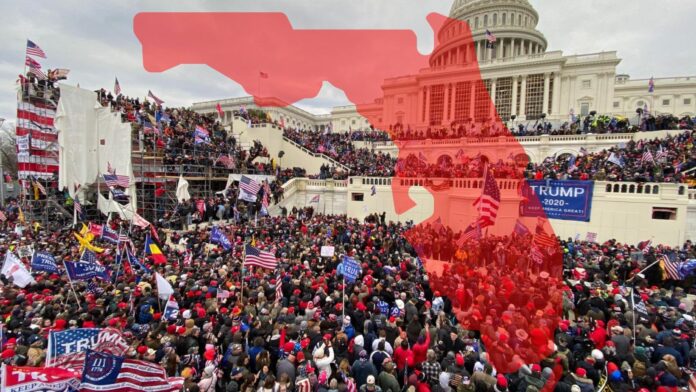 The Department of Justice said more than 535 defendants had been arrested so far in connection with the attack on the Capitol, January 6, 2021, one of the most documented crimes in history. FBI Director Christopher Wray said the federal law enforcement agency has “hundreds more investigations still ongoing,” including more serious charges still in store.

The state of Florida is home to the most defendants charged in connection to the Jan. 6 Capitol Riot, with 55 total as of today. Texas is number 2.

So far just one defendant nation-wide, Anna Morgan-Lloyd, has been sentenced, to three years probation and no jail time.

Yesterday’s arrest of a Viera High School Teacher/Football Coach brought the total number of arrests for Brevard County to 7; the most arrests for one County in the entire United States. Franklin County in Ohio also has 7 arrests, tying Brevard.

Brevard County, the Space Coast, is home of NASA, Space-X, etc, and consequently home of literal rocket scientists, and some of the most intelligent people on the planet.

That begs the question, why does Brevard seem to be leading the way in this criminal behavior?

Brevard County Congressman Bill Posey (R-Rockledge) voted against the certification of Biden’s election to the presidency hours after the mob stormed the Capitol.

“Whether you, I, or anyone else likes it or not, the constitution was violated and calls for an investigation should not be ignored,” Posey said in the early hours of January 7, when Congress reconvened to certify Biden’s win.

In a press release on the day of the riots, Posey’s office released a statement saying “I’m disappointed that today’s Congressional proceedings over counting and challenging electoral votes were disrupted by a small number of individuals who breached Capitol security.”

Brevard County District 53 State Representative Randy Fine expressed his outrage of the attacks in a Facebook post. Fine who is a strong supporter of Trump called for the death penalty if possible for those involved in the riots.

“I hope every single one of them receives the maximum possible punishment, up to and including capital, where the criminal conduct qualifies,” Fine said in his post. Fine himself, also called into question the validity of the election results that lead to the riots. “There is absolutely no question that a number of states violated our Constitution by non-legislatively changing their election laws at the last minute” -Fine’s Facebook post.

Failed Palm Bay City Council candidate Janice Crisp documented her January 6th road trip on a now deleted Facebook live video where she says she is on her way to DC to “kick some arse,” and “get revenge” while displaying the “O.K.” sign used to signify white supremacy.

In response to being blocked by Fine on his Facebook page under a post challenging the legitimacy of the election, he told his constituent to “go eat some shit,” along with other profanities in a private Facebook message.

Whether or not the rhetoric and comments made by these Brevard County politicians contributed to why Brevard leads the nation in arrests for the riots is yet to be determined. However, many of those charged already have stated their defense is blaming the information provided to them by their elected leaders to include President Trump.

Senate Majority Leader Mitch McConnell agrees. He infamously said in a speech from the House Floor during the confirmation of the Electoral Vote, “The mob was fed lies…..They were provoked by the president and other powerful people, and they tried to use fear and violence to stop a specific proceeding of the first branch of the federal government which they did not like.”

This weekend, a handful of Florida Republican candidates will host a rally in Tallahassee calling for Gov. Ron DeSantis and others to put pressure on authorities to free the “political prisoners” of Jan. 6.

The “Free Our Patriots Rally in Tally” will be held this Saturday, July 10, and is hosted by Luis Miguel, a far-right Republican candidate looking to primary Sen. Marco Rubio. “Folks, The patriots who have been hunted down by the corrupt, communist FBI are suffering. Many of them are veterans who fought for this nation,” tweeted Miguel. “Let’s do our part to ensure they’re liberated. We can’t allow this in America. Be there at the Florida Capitol July 10.

Tampa Bay Republican and two-time congressional candidate Christine Quinn has also publicly stated that she will attend the event.

“Join me to support our Patriots that have been unlawfully arrested and detained without due cause,” posted Quinn to her Instagram account. Like Miguel, Quinn has consistently denied that Joe Biden won the 2020 election, and she also continues to deny that she lost her own election to District 14 Congresswoman Kathy Castor who won more than 60% of the votes.

Quinn has since dropped a lawsuit contesting her election results and says she will run a third time in 2024. She’s suing local Trump supporters for leaving her with all the travel expenses to the U.S. Capitol on Jan. 6

Here is a list of those arrested so far in Brevard County.

The FBI is still asking for help in identifying hundreds of suspects captured on video during the riots and has released new videos from the event.

If you have any information on the individuals depicted in the following videos, please call 1-800-CALL-FBI or submit a tip online at tips.fbi.gov. Please reference the AFO number when calling or submitting information online.

Note: Video contents may be disturbing. Viewer discretion is advised.