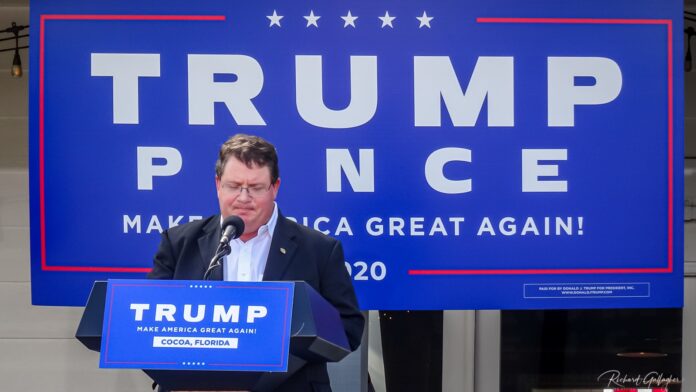 “I am truly frightened tonight by the decisions of Facebook and Twitter to move full-scale into the “cancel culture.”…..As much as I thought it couldn’t get worse than the Capitol desecration, I now realize I was wrong”

The day of the attacks, he called the election unconstitutional, echoing the unfounded and debunked by the courts claims of Trump and other lawmakers.

Every state in the United States changed their election laws, including Florida by the powers delegated under a state of emergency in order to respond to the Covid-19 Pandemic. Florida alone changed voter registration dates, mail in ballot procedures, petition requirements, and more; all done by the Governor and the Secretary of State.

Here is comprehensive list to what every state changed this year without the legislature.

Fine is essentially calling his own election unconstitutional.

In a now deleted Facebook live video, Crisp says she is on her way to DC to “kick some arse,” and “get revenge” while displaying the “O.K.” sign.

In the past, she has called for the Proud Boys to come to Palm Bay. Both Randy Fine and Brevard County Commissioner Bryan Lober supported her campaign.

Fine, responding to a comment on his post called a constituent a “career asshole” before blocking her. He then told her to “eat shit.”

Fine, who is a part of the government, deliberately suppresses free speech, and even violates Florida Sunshine Laws by deleting comments made by both himself, and voters on his social media on matters of official business.

Twitter and Facebook however, are not the government. They are private organizations with clear policies and guidelines. They are under no obligation to allow you to use their service, and you have no right to use their service. Local elected officials and elsewhere take pride in bragging about cutting off certain media outlets from information. Now that an outlet has cut them off they feel it’s an attack on the Nation.

Our very own Sheriff has intentionally withheld emergency information about a hurricane from Florida Today because he doesn’t like them, and went as far as to put that in writing in his official response.

“While Sheriff Wayne Ivey and the Brevard County Sheriff’s Office are always willing to answer questions and work closely with our great partners in the media who work hard every day to accurately report the news, we do not under any circumstances respond to questions from the Florida Today.”

If Fine wants to say them suspending accounts that refuse to comply with their policies is worse than insurrection on our Nation’s Capitol and the desecration of its halls, and even advocating for the death penalty; then what should be his penalty for suppressing the 1st Amendment rights of the people, and intentionally obstructing public records requests?

One of these parties is breaking the law, and it’s not Twitter or Facebook; it’s the lawmaker himself and he should be ashamed, but he’s not. He’s acting like a proud boy.