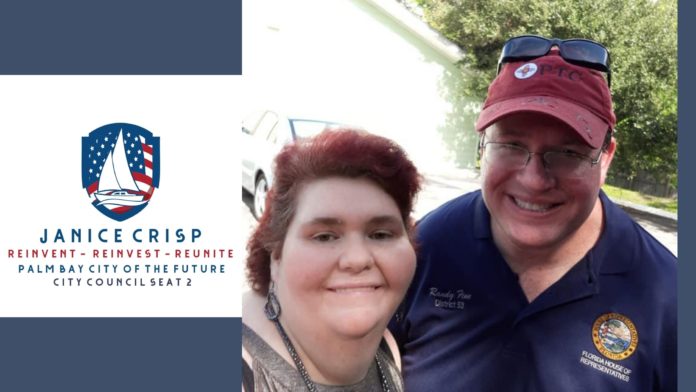 There has been an ongoing court case against Janice Crisp (Stout), Reid Stout, beginning 7/29/19.

These cases are due to the lack of house/rent payments. On 10/26/18 she entered into an agreement to purchase a home for the amount of 145,000. She then wrote a letter stating she could no longer afford to pay mortgage.

Crisp stated they would quit claim property to the owner in lieu of foreclosure, agreeing to rent for 30 days until they could vacate. They did not pay rent as promised, owing 10,970.80 for the period of 12/1/2018 through 9/1/2019. The owner then attempted to evict. They refused to vacate or pay.

Court papers were filed. Janice claimed to be owed 12,746.00 for reimbursement towards purchase price by the owner, claiming the owner “would steal the home out from under us.”

The Judge ordered them to pay 1492.00 per month with 10-day grace period, until case could be heard. Failure to pay resulting in eviction.

Crisp is currently one of 5 candidates for for Palm Bay City Council seat 2. She is backed by both State Representative Randy Fine and Brevard County Commissioner Chair Bryan Lober.

Fine himself similarly faced eviction in 2017 for refusing to vacate a condo he was leasing.

Court documents can be seen below.