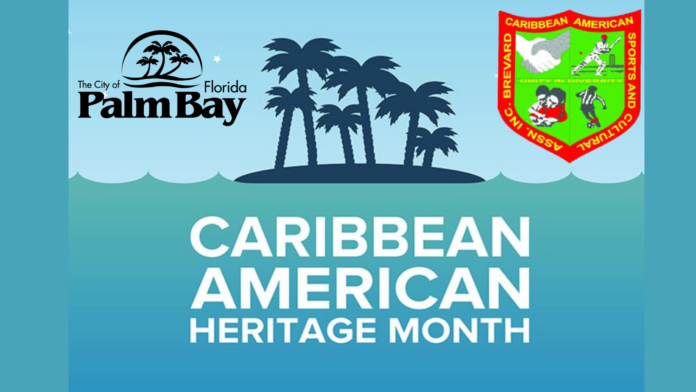 The month of June was adopted by Congress as Caribbean-American Heritage Month
in February 2006. During the month we highlight and acknowledge the significant
contribution of Caribbean-Americans and their descendants in our country and in
Brevard county. They have shaped our culture and heritage, enriching our communities
with their contributions to music, film, the arts, business, literature, government, sports,
food, medical field and in many other areas.

It is with this in mind that BCASCA ( Brevard Caribbean American Sports & Cultural
Association), the largest Caribbean Organization in Brevard county, has decided to
celebrate this Caribbean American Heritage Month in a big way. We are bringing the French,
Spanish and English speaking Caribbean together to showcase the rich culture and
heritage throughout the entire month of June. The city of Palm Bay has been working
closely with BCASCA to help them host several events throughout the city. The kickoff
will be on Thursday June 3rd at city Hall for the proclamation ceremony starting at 6pm
on the lawns of city hall. There you will get a taste of what is to come for the rest of the
month with samples of food, music and cultural displays. Friday June 4th at Veterans
Park they will host Caribbean Friday, where you will see, feel, smell and taste the
Caribbean. Iruption Band will be performing along with local acts giving us a good mix
of Salsa, Merengue, Reggaeton, Calypso & Reggae music. “Get Ready to dance and
have a good time, wear your colors and costumes” says Anthony Harris the
entertainment coordinator for the BCASCA June events. Caribbean Friday is free
family event and is from 5pm – 10pm.

Also for the month of June BCASCA will be hosting a series of virtual and in person
discussions with Consul Generals from several Caribbean Islands including Barbados,
Bahamas, Jamaica and Haiti. These events will be streamed live on Facebook in

collaboration with Palm Bay Live and 321LitUp. Highlights of all events can be seeing
on Irie Times TV which is a Caribbean TV station out of South Florida. “ We are excited
to have these Caribbean media partners on board to help us bring what we are doing
in Brevard to county to the rest of Florida” says Helen Nixon one of the organizers of
the event

The Caribbean influence in the city of Palm Bay is undeniable as both the former and
current Mayor are both of Caribbean decent, Cuba and Puerto Rico respectively and
current councilman Donny Felix is originally from the Island of Haiti. There are also
several successful Caribbean-American owned businesses throughout the county.

There are over 14 events organized for the month including the CaribeFest Mini Film
Festival and Photo exhibit to be held on June 11 th . The Aaah Inspiring Antarctica
Experience exhibit features Judith Falloon-Reid the first Jamaican to visit Antarctica.
You can expect to see Caribbean Films, Caribbean Art, Poetry from Marcia Jackson
and internationally acclaimed Dub poet Malachi Smith at the Captain’s House, Goode
Park Bianca Dr. NE Palm Bay. This family-friendly event is also free and you are
encouraged to bring your hand drums for a drumming circle at the end.

“There are persons from north and south Florida already planning to spend their weekends here in Palm Bay to attend our
events in June and when they arrive we will be encouraging them to check out our
county and see what else Brevard has to offer”, says Kay Maragh, VP of BCASCA.

June 26th is the Big event with a Caribbean Style Carnival Parade at Fred Poppe Park
there will be performances by Eruption Band, Karibe Kings, Zonie Zoned, Ras
Professor and other local acts and DJs, Drummers and Masqueraders plus a host of
activities for Teens and young children. There will also be performances by Palm Bay’s
only Steel Pan group the Palm Bay Panatics.

Marica Campbell, President of BCSCA says “My hope is that the collaboration with our
French, Spanish and English Islands during the month long celebration of our
Caribbean heritage will form a unity which will extend beyond June and into BCASCA’s
vison of building the Multicultural Center on the property purchased recently which we
can celebrate and showcase Caribbean culture throughout the year.”

The month of June promises to be an exciting one and a great start to Summer. To
become a sponsor or a vendor call 321-557-2968 or to learn more check out the
BCASCA website www.BcascaFL.com and Facebook Page @Brevard Caribbean
American Sports & Cultural Assoc, Inc (BCASCA)