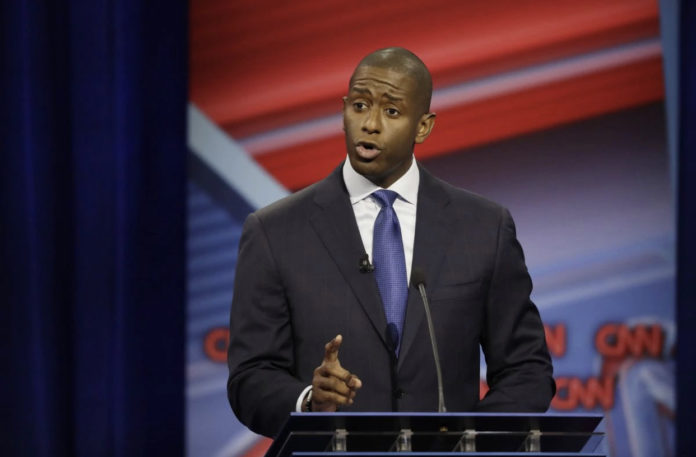 Former Florida gubernatorial candidate Andrew Gillum says he is going into rehab after he was found by police in a hotel room that had small bags of suspected crystal meth and in the company of a man who had overdosed.

Gillum said in a prepared statement he will be stepping down from “all public facing roles for the foreseeable future.”

“After conversation with my family and deep reflection, I have made the decision to seek help, guidance and enter a rehabilitation facility at this time,” Gillum said in a prepared statement. “This has been a wake-up call for me. Since my race for governor ended, I fell into a depression that has led to alcohol abuse. I witnessed my father suffer from alcoholism and I know the damaging effects it can have when untreated. I also know that alcoholism is often a symptom of deeper struggles. I am committed to doing the personal work to heal fully and show up in the world as a more complete person. I now need to firmly focus on myself and my family. I will be stepping down from all public facing roles for the foreseeable future. I want to apologize to my family, friends and the people of Florida who have supported me and put their faith in me over the years.”

The police report says that officers responded to a room at 1100 West Ave. late Thursday night, which is the address of the Mondrian South Beach. Police found fire-rescue staff treating a man for a possible drug overdose.

In a prior statement, Gillum said that while he had not used methamphetamines, he had too much to drink.

Police said there were three men in the hotel room: Gillum, the person having a medical emergency and someone else.

One of the men told police that when he arrived at the hotel shortly after 11 p.m. Thursday, Gillum and the person having the medical issue were “inside the room under the influence of an unknown substance” and that he “observed Mr. Gillum inside the bathroom vomiting.”

The police report said that on arriving early Friday morning, officers “attempted to speak to Mr. Gillum. Mr. Gillum was unable to communicate with officers due to his inebriated state.”

The report also said that fire-rescue responded a second time to the hotel for a welfare check on Gillum and determined he was in stable condition and his vital signs were normal. He was not arrested.

“We responded to this call as a medical call,” Rodriguez said. “Although there were narcotics in plain view, no one was in possession of those narcotics. So what our officers did was impound those narcotics.”