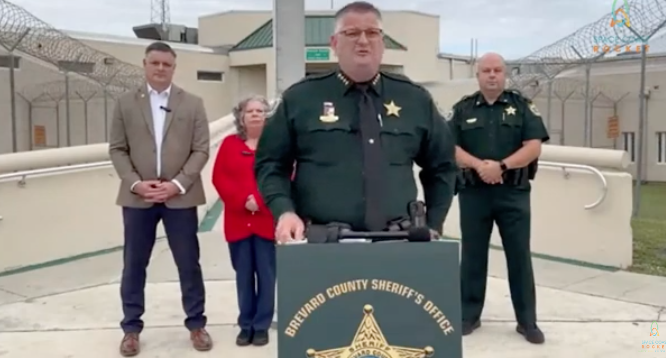 This morning, Brevard County School Board Chair Matt Susin, along with Sheriff Wayne Ivey, and State Attorney Phil Archer held a press conference (without inviting the press) about the school discipline policy.

School Board Chair Matt Susin, who is going into his 7th year on the Board proclaimed he has been contacted by countless teachers and staff that feel they are handcuffed by the current policy, and that discipline is out of control in the district.

The current discipline policy can be read here. It is important to note that the policy that Mr. Susin and Sheriff Ivey have proclaimed to be a chronic and systemic problem has been in place since 2019, and revised as recently as February 8, 2022. In 2019, the Brevard Public School Board that implemented this policy, consisted of a Republican majority board, of which Susin was also a member.

In February 2022, when the policy was minimally revised, there was a workshop to address the policy. During the workshop, not one member of the public spoke on it, neither a single teacher, neither a single staff member, neither did Matt Susin. What Mr. Susin did decide to speak on at length, was that our policy for allowing students to transfer schools and play sports wasn’t fair.

When it came time to vote for the CURRENT policy, again Mr. Susin had no comment or complaint about the policy, nor did any member of the public, no teacher, and no staff member. Neither did Sheriff Ivey for that matter, nor has he ever attended an actual School Board meeting that one can recall. And just like 2019, Mr. Susin again voted in FAVOR of the current policy. It should also be noted that the School Board develops the policy, and directs the Superintendent to enforce it.

Brevard Schools Superintendent Dr. Mark Mullins did exactly that. Newly elected School Board Members Megan Wright and Gene Trent, along with Matt Susin decided that Dr. Mullins should be fired for implementing the policy Mr. Susin himself help craft and passed. Dr. Mullins’ employment was brought up by Megan Wright without notice to the public.

During the press conference, Mr. Susin and Sheriff Ivey continuously bashed the current policy, stating it was the cause of the discipline issues the district is currently facing. “That ends today,” said Ivey. Without any specifics about what exactly was going to change, Susin and Ivey reassured teachers and parents that order would be restored, and that teachers could actually teach instead of having to worry about discipline.

Sheriff Ivey also stated that if any crimes are committed, then he will enforce the law. It’s not clear if he is implying that he was not enforcing the laws in the past for criminal violations or not. That would have been a question asked at the press conference if there was actually press there to ask such questions.

Other questions that could have been asked to Mr. Susin, that in his now 7th year on the Board, why is he just now bringing this up, and why did he vote for the currently policy twice. In fact, every member present at the “press” conference have all been in their current positions for several election cycles, and not once had they brought this issue forward before.

Neither newly elected members Gene Trent, and Megan Wright ever showed up to a board meeting while they were candidates to address student discipline.

Sheriff Ivey went as far as to say that some students needed the “cheeks of their asses torn off.” He ended the press conference with “If you’re a little snot….we are gonna be your worst nightmare.”

Susin stated that he would be calling an emergency meeting next week to address the policy.