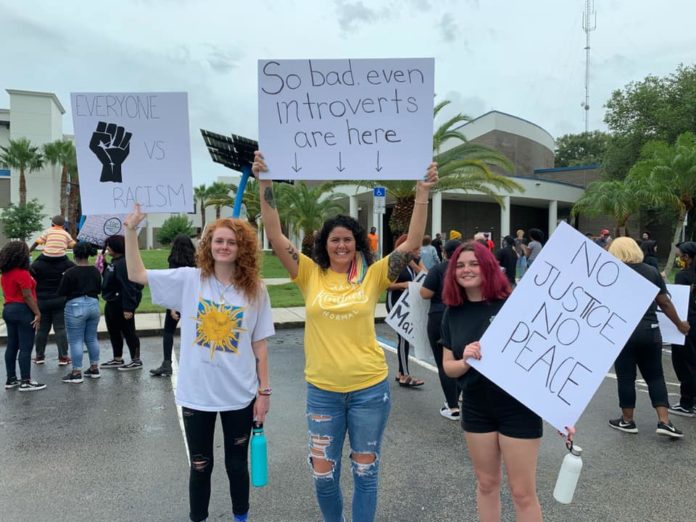 State Representative Randy Fine (Republican-Melbourne Beach) up till now been silent on the George Floyd murder on May 25th that sparked protests all around the world. He took to Facebook today referencing several scheduled peaceful protests around Brevard County, but instead of advocating for people expressing their first amendment rights, he used them to advocate for fire works celebrations. Most local municipalities have cancelled their events out of precaution to protect the public or because of lack of funds from the economic impact.

Many local elected officials and leaders of law enforcement have participated in the protests and vigils on the killing of George Floyd, standing in unity with the community. In contrast, volunteers from Fine’s campaign team were seen in their own Facebook live video trying to infiltrate and provoke a peaceful protest of prayer in West Melbourne. In the video, volunteer Karen Colby can be heard talking to Randy Fine who was watching the nearly 8 minute video and saying “please don’t let them know I’m watching.” They went on to call the protestors “idiots” and other defamatory terms. Colby is under investigation by law enforcement for some of her comments on social media related to the protests. Others have already been arrested for similar comments.

Since the beginning of the Covid-19 Pandemic, Fine has been very vocal and critical of local elected officials’ handling of the issue. He attacked County Commissioners who tried to leave hotels opened for local victims of domestic violence, and also for not closing the beaches fast enough. He even went as far as to tell his followers that if they saw an out of state license plate on the road, to call the police and report them.

Critics have accused Fine of politicizing the pandemic and using fear mongering to grow his following on Facebook. Since April, his following has grown from 10k to over 20k followers as he ran paid political Facebook ads to follow him for information on Covid-19. Fine posted daily stats showing the number of positive cases and deaths in the community. In a county commission meeting, he gave a speech saying that according to his calculations, under the best case scenario Brevard County will see 400 deaths from the virus. He said if we did not act by closing everything down, we would see up to 4,000 deaths in Brevard. As of today, there have been a total of 13 deaths in Brevard County attributed to the virus.

Brevard County Sheriff Wayne Ivey drew criticism by speaking against NASA’s recommendation for visitors to stay home and watch the historic Space X launch returning humans to space from US soil after 9 years. Ivey defiantly said “they have their guidance, and I have mine.” Photo’s showed crowds estimated at around half a million spectators packing the causeways and sides of the roads.

Fine made several Facebook posts boasting about being invited to attend the launch which was to be attended by President Trump. When asked repeatedly if he agreed with the Sheriff’s position of inviting people from out of town to come here for the launch, he declined to comment and deleted the questions from his Facebook page. This is in direct contrast to his position just weeks before asking residents to call the police if they saw out of state license plates. Fine did attend both the first attempted launch that was cancelled due to weather, and the actual launch last Saturday, wearing his mask.

Fine’s post today drew some sharp criticism from some followers pointing out his silence on the Ivey’s multiples parades he held during the outbreak as well as his comments on the launch. Fine has deleted most of the comments against him from his post. Several comments were accusing Fine of an attack on the 1st Amendment, of which he is often accused of by suppressing free speech on his official Facebook page and deleting comments which many feel to be illegal itself in violation of Florida Sunshine Laws. Fine’s response to the criticism was that because of the 4th of July celebrations, people are able to protest which of course is not true.

The 4th of July celebrates the Declaration of Independence which occurred in 1776. The 1st Amendment which protects free speech and protests was not ratified until 1791. The constitution itself wasn’t written until 1787.

Fine, who has been a strong advocate for the Jewish community leading the passage of several laws to benefit and protect the Jewish faith has been noticeably silent on issues of minorities and civil rights. In fact he’s been disproportionately critical, and publicly attacks local elected minorities on a regular basis. From the comments on his Facebook page (before being deleted), people are starting to notice.