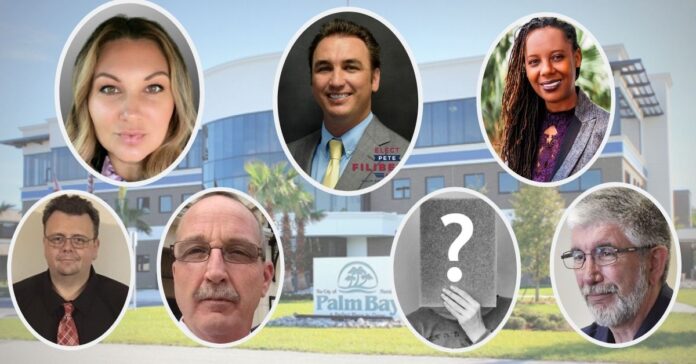 Palm Bay Republican Peter Filiberto confirmed with The Space Coast Rocket today that he plans on throwing his hat into the ring for the special election that will take place to replace Councilman Jeff Bailey who announced he is resigning.

Filiberto ran for seat 2 in 2020 but was defeated by current Councilman Donny Felix.

Filiberto says, “I do plan to run for the vacated seat, and will ensure that the road bond program continues to stay on schedule. There is also some work left to be done regarding local business preference in the procurement process. Another concern I want to address is the cyber infrastructure within our city, in order to protect our city from malicious actors and cyber attacks. I want to be proactive on this issue, to prevent such attacks as seen on other municipalities and the Colonial Pipeline.”

Because of the date Bailey says will be his final day, it comes just weeks before what would be under a year before the primary election to be held next August. Bailey says his last council meeting will be August 5th this year. Since there will be over a year left in his term, a special election shall occur, according to city ordinance.

Ironically, by Bailey (who is relentlessly fiscally conservative) making his announcement in this timeframe forcing the special election, it is estimated to cost the Palm Bay tax-payers over $100,000 to conduct the election. This comes on the heels of one of the tightest budgets in the City’s history due to Covid-19 and the Road Bond.

Who Else is Running?

We spoke with Thomas Gaume today and he confirms he is not running. Gaume ran in 2018 and 2020 unsuccessfully, but now currently serves on city advisory boards. He is known as a watchdog, and sniffing out corruption.

Another common name in Palm Bay politics is Thomas Rebman who temporarily served as a liaison for the homeless to the city before being asked to resign. Rebman was reportedly seeking the support of former Palm Bay City Manager Gregg Lynk and former Councilman Brian Anderson in order to run, but told us today he has decided not to run.

Kay Maragh, who ran for Mayor last year against Mayor Rob Medina is thought to be a front runner for the seat due to her performance last election, but has not confirmed whether she is considering running or not.

Also considering a run at the seat is lifetime resident Jaclyn Bounauito. Jaclyn has served on the City’s Youth Advisory Board. She has a business degree, and has served as a business development manager for 8 years with small business throughout Central Florida. She volunteers as a Girl Scout Troop Leader encouraging our future female leaders, and is a small business owner in Bay Side Lakes. Jaclyn says that she’s considering running because she “loves her city.” She also says, as a conservative Republican she wants to see “responsible growth and development in our city, and push more small business development from our own residents.”

Another name from the 2020 campaign is Alfred Agari who came in last place for the Mayor’s race. After being blown out in the primary election for Mayor, Agari became surrounded in controversy over accusations of vandalizing signs, illegal campaign contributions, and illegal campaign signs against his former opponents. He is reportedly interested in seeking this seat.

Alan Borkowski, who also ran in 2020 confirmed today that he is considering a run. He tells us “I wish Jeff Bailey all the best and if everything works out I hope to be able to fill his seat with honor and integrity.” Alan has a Bachelor of Business Administration from Strayer University.

Another possibility but not confirmed is Nathan White. Nathan has filed to run against Deputy Mayor Kenny Johnson for next year’s election, but may possibly seek this opportunity to run for an open seat instead of against a favored incumbent. Nathan could not be reached for comment as of publication of this article.

Chris Duncan who ran for congress against Bill Posey and also for State Senate may also consider a run. He has run for Palm Bay City Council in the past but did not qualify.

“Coach” Aaron Parr is the Republican who last ran against Bailey in 2018. Parr currently serves on several boards for the City but stated he does not currently plan on running for this special election.

This certainly isn’t an all inclusive list, and those mentioned above can of course change their minds. There may also be someone considering running that isn’t on anyone’s radar as well.

Special elections have by far the lowest voter turn-out historically. Republicans historically have a higher turnout percentage than democrats in Palm Bay.

Currently there are 3 Democrats and 2 Republicans on the council; Bailey being one of the Republicans. City Council races are non-partisan which means that candidate’s party affiliations are not shown on the ballot.

I believe that this will be a race between the Republicans as they have more of a motivation for turnout. Democrats already have the majority on the council, and filling this seat or not will not change that. Whoever does win the seat will likely run for reelection next year and will technically be the incumbent, giving them a huge advantage over other contenders.

Often, Republicans are hesitant to challenge a sitting Republican, but with Bailey resigning, that obstacle is no longer there. That opens the opportunity for many Republicans who ever considered running in the past to do so now without the challenge of an incumbent of the same party.

Also of note is that there has not been a female on the Council in the last 2 terms. That opens the opportunity for a female to run and gain a seat on the currently all male council for those who would like to see a change and more diverse representation.

Councilman Jeff Bailey has not yet endorsed anyone for his replacement, and is not guaranteed to do so. He did however appoint Filiberto to the current city board that he sits on which could imply an endorsement in of itself.

The special election although costly, will be a short campaign, and can occur in as little as 90 days. That is not a lot of time to fundraise, and campaign for new candidates to get name recognition, which also gives an advantage to those who have run in the past. Newcomers will have to adhere to a short learning curve, and be aggressive in order to be successful.