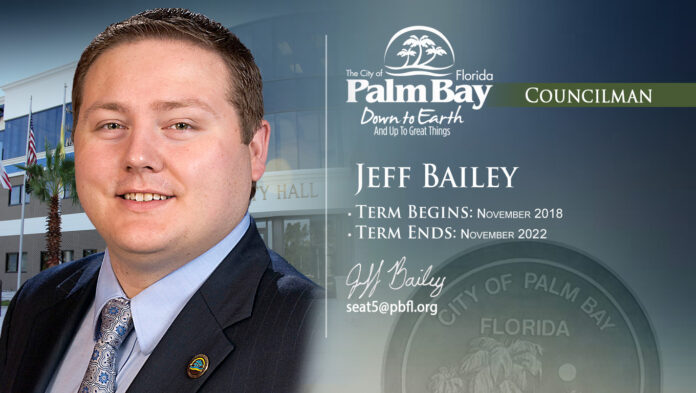 UPDATE: 2020 candidate Peter Filiberto has already committed to running for the open seat in the special election.

Tonight, in a late running City Council Meeting, Councilman Jeff Bailey (Republican) announced during board reports that he has accepted a job out of state. He said as a result, his last day on Council will be the August 5th meeting.

Bailey was currently up for reelection, however had yet to officially file. He is the most senior member on the council in terms of time in service. He was reelected for his 2nd 4-year term in 2018. His resignation will make Deputy Mayor Johnson the most senior in time served on Council.

Bailey stated that his and his wife’s decision was surrounded by lots of prayer, and they are excited for the opportunities that lie ahead.

He believes that we have rough times ahead in this Country, and this move will put him closer to his family, which he says matters most.

Bailey was known as arguably the most conservative member of the council, and often relentless on spending.

Bailey’s seat (Seat 5) will now be somewhat of an open seat without a traditional incumbent in the 2022 election. The only other seat up for election is that of Deputy Mayor Kenny Johnson (Seat 4) who has already filed for reelection, and has one challenger.

His absence will leave Mayor Rob Medina as the only Republican on the council. Deputy Mayor Johnson, Councilman Foster, and Felix are all Democrats.

Each member of council expressed their support for Bailey’s service and his decision to do what’s best for his family.

Palm Bay City Ordinance outlines the procedures for filling the vacancy, which in this case will be a special election.

§ 50.55  COUNCILMEMBER — PERMANENT VACANCY.   (A)   When a permanent vacancy occurs in the office of councilmember as a result of death, resignation, illness, disability, forfeiture of office, written court order, or other lawful written order or action, such vacancy shall be filled in accordance with the following procedures:

(1)   When there is one (1) year or less remaining in the term of said office, the council shall, by a majority vote, choose a qualified successor to serve the remainder of the term.

(2)   When more than one (1) year is left remaining in the term of said office and no general municipal election is scheduled within one (1) year, a special election shall be scheduled to be held no sooner than ninety (90) days or more than one hundred eighty (180) days following the date of the vacancy.  The individual elected shall serve the remainder of the unexpired term. (Ord. 2012-47, passed 12-20-12)

Speculation has already started of who will fill the seat. Among those mentioned are Thomas Gaume who ran unsuccessfully in two prior elections. Peter Filiberto who ran in 2020 but was defeated by Donny Felix. Kay Maragh who ran for Palm Bay Mayor, but was defeated last year by Mayor Rob Medina. Aaron Parr is also a name on the list who was Bailey’s opponent in 2018.

§ 50.18  SPECIAL ELECTIONS.   (A)   A special election may be called by the City Council only after notice is given to the supervisor of elections and his/her consent obtained as to a date.

(1)   The date upon which such election is to be held;

(3)   The wording of the ballot to be used in such election.

(4)   The City Clerk shall give notice of the special election and the provisions thereof by and through the publication of an advertisement in a newspaper of general circulation in the city at least thirty (30) days before the day upon which the election is to be held, and again at least fifteen (15) days before the special election.  A sample ballot shall be published at least one (1) day prior to the election. (Ord. 2001-08, passed 2-1-01; Am. Ord. 2013-31, passed 4-4-13)