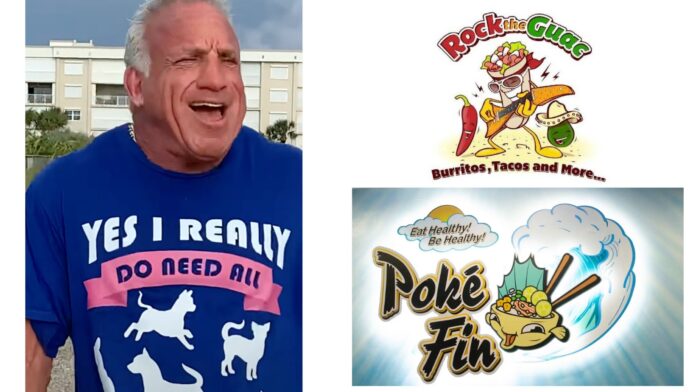 Ron Abeles is the owner of a Cocoa Beach restaurant named Rock the Guac! Its Facebook page says it’s “The best Mexican food on the Space Coast!” He also own the Poke Fin restaurant in the same building.

Yesterday, Sarju Patel posted cell phone video recorded by friends of his family of their interaction with Ron on the beach. The video starts showing Ron walking 4 dogs on the beach without a leash with one of the dogs about 50 yards away from him “saying hi” to the couple recording.

The couple who recorded the video are both doctors who own a condo in Cape Canaveral. The wife is reportedly afraid of dogs.

Ron can be heard yelling at the couple in the video to “go back to their country” after the wife states he is not following the rules of the beach by allowing his dogs to roam freely. Several residents commented on the Facebook and Nextdoor posts saying that Ron frequently allows his dogs to roam freely, and to poop on the beach and not clean it up.

After the video spread on social media, Ron continued to defend his actions. Some residents defended Ron as well calling the couple “Karens” and to mind their own business. One woman went as far to say that the wife is lucky she didn’t get her teeth knocked out.

The majority however, were quick to point out his uncalled for, racist comments, and stated he has a history of being a “hot head.”

Others pointed out that as the owner of small businesses that depends on tourism and visitors, he should be more respectful of all.