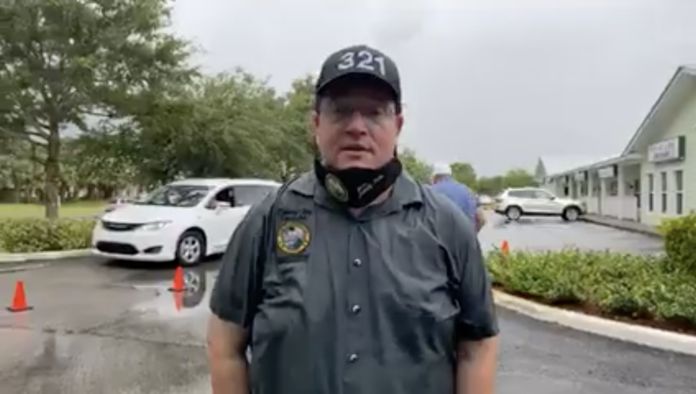 By far, the most contentious race this election is a rematch of 2018, between Republican Randy Fine and Democrat Phil Moore for House Representative for District 53.

Fine is a retired casino manager of a successful casino consulting firm known as the Fine Point Group. He lives in Melbourne Beach. For the 2018 election he raised $326,675 and spent $276,599 on his race; a staggering cost of $6.56 per vote received.

The 2020 rematch looks much more promising for Phil this year. Yesterday Fine announced he raised a total of $354,986 this cycle. Of that, more than $100,000 came from PACs and the remaining from other special interest groups from all over the Country. In fact, less than 5% of Fine’s money came from actual voters in his district. By comparison, his opponent, Phil Moore, raised less than 10% of that — $22,745, almost exactly what he raised in 2018.

Why is that good for Phil? This year, as a result of Fine’s poor performance on the job, he faced a Republican Primary opponent. Between his own campaign finances, and the aid of several PACs, he had to spend over $300,000 to defeat his opponent. However, despite this staggering amount which was more than all other 3 State Representatives combined, over 35% of Republicans voted AGAINST Fine for an opponent who was unknown and had zero experience, and no money in comparison.

In short, Fine demonstrated quite convincingly he is not liked by his own party, and had to paying an unheard of $15 for each of his 10,428 votes with just his own campaign finances. Factoring in the money spent on his behalf by PACs, that comes out to unbelievable $28 per vote. In addition to that, Fine had to request a robocall from the President of the Republican Party of Florida himself, to call voters the day before election on his behalf. Still with all that money and negative attack ads from his campaign, over a third of Republicans chose his opponent.

Despite Moore only having just over $20,000 at his disposal (what Fine spends on a single mailer), Fine was still begging voters for money all the way up until yesterday in Facebook posts. With only one share from his over 22k Facebook followers, voters are frankly tired of it.

But why is Fine begging for so much money against an opponent with virtually none? Because in order to simply match the 42,163 votes he got in 2018, he would have to spend $632,445 given his current performance. He simply doesn’t have it. And this year, 35% of Republicans have shown him that he also doesn’t have their votes.

Fine received a $13,000 in-kind donation from the Republican Party of Florida for polling numbers. The results of the poll were leaked, and the numbers don’t look good for Fine.

Although most Republicans are not going to vote for Moore, they have chosen to abstain from voting in the race at all in protest to Fine’s liberal policies on gun control, big spending, flip-flopping, and misleading his constituents. His attacks on the 1st Amendment by blocking constituents from his Facebook page and deleting their comments and attacking them personally for speaking against him, to his attacks on the 2nd Amendment taking guns away from military aged citizens, are non-starters for most true Republicans.

In fact, conservative Republican talk show host Bill Mick recently went as far as to publicly endorse Phil Moore, and encouraged all Republicans to vote for him over Fine over Fine’s troubling behavior.

Democrat Phil Moore is the pick here in order to begin cleaning up the Florida House. The current representative has not only ignored the constitution with infringements on the 1st and 2nd amendment issues addressed by the House, he is unrepentant and vindictive in his conduct. While someone of Phil’s far leftist bent is not going to advance my staked out political positions, he won’t advance ANY issues in a Republican controlled House. This is far better than someone claiming to be one of our own who has turned his back on the principles he claimed to hold when first elected. An ineffective Democrat in this race is a far better choice that what we currently have.

There’s also another option Republicans are taking advantage of. This year, Randy Fine convinced an 18 year old kid to run for his office as a “write-in” candidate in order to make the primary race a closed one, in the event that Moore didn’t qualify. In doing so, Fine convinced the kid of committing a 3rd degree felony since he is not even old enough to meet the age requirements for State Representative in Florida. Fine went as far as to have the kid work on his campaign team distributing signs. His parents were both contributors to Fine’s campaign, and the President of his former HOA.

That means on the ballot there is a slot to actually write in a candidate. Many Republicans have posted that they decided to write-in Fine’s Primary challenger Dr. Marcie Adkins in protest.

Despite spending more than all other Representatives combined, Fine has historically received the least amount of votes compared to his peers.

So what does all this mean?

35% of the turnout for the Republican vote is up for grabs which equals 13,270 votes.

What are the possible scenarios?

Much like the Palm Bay Mayor race, this race is going to be determined by the NPAs. All things considered, the NPAs lean Moore’s way for several reasons.

If Fine has pushed away a third of his own party, he’s certainly pushed away NPAs who don’t like the partisanship, dirty politics, and vitriol displayed by Fine on a daily basis. The last 4 weeks Fine has gone on a scorched earth attack against Moore from which voters see as unprovoked, and unnecessary. But his attacks are IDENTICAL from his attacks in 2018. They are frankly, played out.

Fine has turned to almost exclusively personal attacks this entire election season and hasn’t even bothered to create a website that speaks on his policies, positions, or plans whatsoever. Instead he has focused on a series of campaign events disguised as charity, pandering to voters during the pandemic, instead of taking the opportunity to discuss what he’s going to do to fix it and prevent the same problems in the future.

He complains almost daily about an ordinance passed by the City of Palm Bay preventing campaign signs from being put on City property. Fine came under fire during the Primary for disregarding the law and forcing tax payers to pay for the picking up of his illegal signs daily. Fine claims this was a law passed by the Democrats, however it was passed with a majority Republican vote in actuality. 3 Republicans and 2 Democrats passed the ordinance unanimously. More misleading over the voters by just lying to them daily about things he wants to complain about and be above the law.

Additionally, he’s facing legal issues with campaign finance problems, and even legally qualifying for the position he seeks by not actually living in the district he’s running for or votes in.

A complaint has been filed with the State Attorney’s office, the Supervisor of Elections office, and the Ethics Commission alleging that Fine has committed a 3rd degree Felony of perjury by voting in a district where he doesn’t actually live, yet stating he does under oath.

So even if Fine should win the election, he could soon be removed from the office anyway.

With only election day pending, voters will soon know the answers at 7:01pm on Tuesday.

One Republican voter at Tony Rosa Community Center put it best. “Imagine an election without all the annoying robocalls and texts, nasty lying postcards, name calling of constituents, and ridiculous press conferences from an actual elected official. I won’t tell you who I voted for, but I voted against all of that.”

Hopefully better days are before all of us.