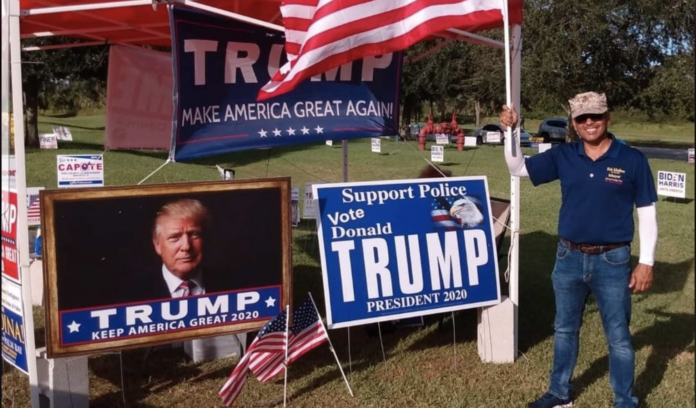 With early voting over, and only election day remaining, a close race for Mayor of the largest city in Brevard has Medina ahead by 4% according to exit polls.

Palm Bay is the only city in Brevard that has a majority of Democratic voters over Republicans (30,439 to 27,907), a difference of about 2,500 voters. The problem Democrats face however is two fold.

A very large number of democrats who have requested mail ballots have failed to turn them in. It’s now too late to mail them in, so voters only have the option of turning them in in person, or voting on election day. The problem with that is that Republicans overwhelmingly turn out in much greater numbers on election day than Democrats in Brevard County.

Both parties in Palm Bay have roughly 10,000 voters who have yet to cast their ballots. But not all of them will, as there has never been a 100% voter turnout in any election. If we see 80% voter turnout this year (2016 was 77.8%), which is higher than the last Presidential election, Palm bay Democrats should only expect to see about 5,000 more voters actually vote, and Republicans should see about 4,800. But given the historical higher turnout of Republicans on election day, that number is virtually equal, which puts the race almost equal between to the two parties.

Without question, the race for Palm Bay Mayor will wont be determined by Democrats or Republicans, but those with no party affiliations at all, or NPA’s.

Palm Bay has a total of 23,295 voters who are registered as NPA. That’s just a few thousand short of registered Republicans and 28% of the total voters. 11,420 NPA’s have voted thus far leaving 11,875 yet to vote. That’s significantly more than both Republicans and Democrats. With an anticipated 80% turnout, we can expect to see another 7,000 NPA’s vote on election day.

So what does that mean? A total of 100 voters answered which candidate they voted for in exit polls at early voting without disclosing their party. 52 said they voted for Medina compared to 48 for Kay. For Medina who is a far right Republican, that’s good news, given that more Democrats have voted than Republicans, thus taking away the numbers advantage of Kay who is a more moderate Democrat.

A look at the candidates platforms and campaign styles could give some insight.

Medina has worked his entire life for the government, while Kay in the private sector.

Medina is by no question popular, and comes with name recognition. He has worked for Congressman Bill Posey for the last 10 years, and is well known in the community for organizing the annual Family Christmas Extravaganza in Palm Bay hosted by The House Church. But both of those positives for him also raise questions that have gone unanswered.

Medina has relied heavily on endorsements from established Republicans throughout the County and the State. But noticeably absent from those endorsements is one from Congressman Posey himself, Medina’s boss for the last decade. Neither Posey or Medina have commented on the issue. Medina has also not told voters whether or not he will continue to work for Posey should he win the election for Mayor.

The second issue is whether or not Medina is paid for his role in the organization of the Christmas Extravaganza, which is an annual event offered for “F-R Double E, Free” to the residents. The event relies heavily on donations from local businesses and money from the city itself to pay for it. Medina, who is a minister for The House Church has not disclosed his income from his position in the church in financial disclosure forms, and has not answered questions about the same.

Medina has been noticeably quiet on social media platforms in comparison to other candidates. Short of a post announcing an endorsement, he has not addressed issues online and has backed out of several organized forums over the campaign season. That’s a sword that cuts both ways with voters, and particularly non-partisan ones.

It keeps him out of the sometimes polarizing back and forth that is common on social media, but also can be interpreted as a lack of transparency or knowledge on issues as well. But given the uniqueness of this political season with Covid-19 which has restricted traditional campaigning events, voters expected to see more of a presence virtually. They depended on it. Medina has lacked that.

Opposite in approach is Kay. She started her campaign doing online, virtual town-halls on a weekly basis, and has kept it going since. In comparison, independently, Medina has hosted none. But this opens up Kay to attack, and leaves her vulnerable to criticism for her answers to questions on the fly.

She’s been both praised for her willingness to put herself out there to the voters, and yet criticized for voicing her frustration at times with some of the back and forth she’s subjected herself to.

Both candidates campaign on leadership ability. Medina accredits his to serving in the Marines for 4 years from 1984-88, and working as an aid to the Brevard County Commission on several projects. Kay points to her experience as a small business owner, VP of a local nonprofit, and a member of the City’s Planning and Zoning board for several years.

But before actually running for office, Kay was essentially an unknown in the political community in comparison to Medina who was defeated in 2016 by Kristine Isnardi for County Commissioner. He comes with the backing of the major players in the Republican establishment to include Sheriff Wayne Ivey, former Palm Bay Mayor John Mazziotti, Senator Marco Rubio, and former Senator candidate Mike Haridopolos who funds many local races through former Palm Bay City Councilman Tres Holton.

Kay’s endorsements have been few. She lacks the backing of the major political leaders in the area or the local organizations known for making large donations to show their support for candidates. She has not been able to raise the funds that Medina has in this race.

Medina has raised a record breaking $53,610 for his campaign and spending another record, $41,929; unheard of numbers for a city race. His numbers are attributed to high profile fundraisers, and big checks from donors.

Kay on the other hand was only able to raise just over $17,000 and spent $15,092. Kay states that she doesn’t see this as a negative however. She says she didn’t have any high profile fundraising events at expensive restaurants, and almost all of her donations come from small amounts from many residents.

“I felt my time was better spent asking voters for information instead of money while everyone is struggling to make ends meet with this pandemic.”

She also says her campaign finances are a preview to how she will govern. “Conservatively and efficiently. These coming years, we are going to have to figure out how to do more with much less as we recover from Covid-19. Spending our way out of it is not a luxury we have.”

Kay says she believes voters will pick who they feel they can trust with the County’s largest municipal budget in this unprecedented time. “Our personal records speak for themselves,” pointing to Medina’s recent bankruptcy, two foreclosures, and debt lawsuits all while being in office for Posey. Medina did not respond for comment.

Medina has demonstrated an ability to raise money, but also an ability to spend even more of it. Kay raises much less, but seems to be able to do more with what she has. Both have their advantages and disadvantages.

Since Kristine Isnardi left for County Commissioner, there has not been a woman to sit on Palm Bay’s City Council. The Council is currently made up of 3 Republicans and 2 Democrats, all males. If elected, Kay would become the City’s first elected female Mayor in its history.

On Tuesday, voters will decide who is the best fit. The NPA’s hold the keys to the City’s future.