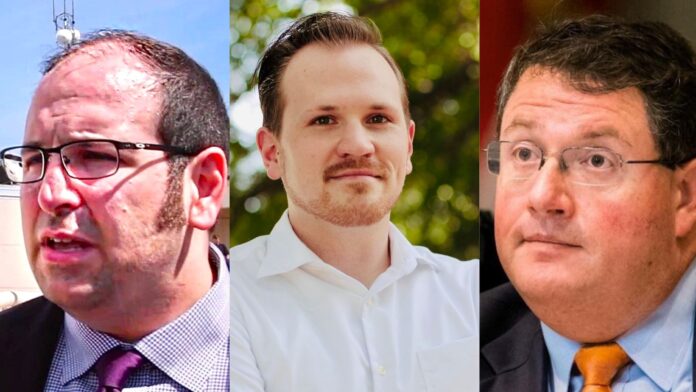 Palm bay resident Nathan White has been running for Palm Bay City Council Seat 4 for just over 1 year. During that time frame, he has managed to raise $4,832 according to his most recent campaign finance report. About half of that amount was raised in February this year from 2 maximum donations from 2 individuals. Prior to that, he had only raised just over $2,000 in about a year of campaigning.

White hopes to change that with a fundraiser he is having today at a church in Melbourne, hosted by State Representative Randy Fine. Fine is at the top of the list of the small host committee on the advertisements for the fundraiser, and has been promoting the event on his Facebook page. Fine’s promotion of White is coupled with the predictable common defamatory statements he frequently posts of Palm Bay’s Deputy Mayor Kenny Johnson, who White is currently running against.

A look at the “About Nathan White” tab of his campaign website simply states that he and his wife are lifelong residents of Palm Bay.

White is new to the political scene, holding no prior elected office or memberships of any boards prior to running for office. He is being promoted by the Randy Fine-backed Space Coast Young Republicans, who have been in an ongoing abrasive relationship with the Brevard Republican Executive Committee. White’s critics have pointed out that he was never seen at a Palm Bay City Council meeting prior to deciding to run for office, despite being a life long resident of the City.

“He’s a Randy Fine plant and puppet,” one Facebook commenter posted. This comes after Fine was recently exposed extorting West Melbourne City Councilman John Dittmore with funding for his city’s projects for not inviting him to a fundraiser for the Special Olympics. Questions have been raised of the authenticity of White’s motivations and if he is simply being used by Fine in order to launch ongoing attacks against Deputy Mayor Kenny Johnson.

White is also being promoted and supported by former Brevard County Commissioner Bryan Lober, who recently resigned in disgrace pending the outcome of several investigations into his spending of federal tax dollars in highly questionable and personal ways. To be fair to White, Lober’s endorsement came before we exposed Lober’s recent activities to the public, however, he too has had an ongoing feud with Deputy Mayor Kenny Johnson, and frequently joins Fine in his baseless attacks. One of Lober’s attacks coupled with Fine’s led to a formal Florida Bar complaint filed against Lober who is an attorney. Lober had to hire outside counsel to represent him in the complaint which resulted in a written warning for his behavior from the Bar.

Lober made a symbolic donation of $321, the city’s area code. It is not clear if those funds came from Lober’s personal funds or from the same funds subject to the ongoing investigation he’s currently under.

Surprisingly, no one on White’s fundraising committee actually lives in the city of Palm Bay which ads fuel to the speculation that he’s simply being used by other elected officials.

White has been showing up recently to every City Council meeting, often criticizing decisions made by the council led by Mayor Rob Medina. He was also recently appointed to a board by the newly elected Councilman Peter Filiberto, who won the highly contested special election to replace Councilman Jeff Bailey who resigned last year.

White has sent out mailers, fliers, and lots of other expensive marketing materials, yet only shows a total amount of just over $200 in expenditures in over a year of campaigning according to his own reports. Voters are questioning who is actually funding his campaign.

His fundraiser is off to a shady start however. He’s been promoting his upcoming fundraiser through illegal Facebook ads and illegal disclaimers that violate Florida’s campaign finance laws. In fact, none of his online advertisements thus far have been legal, frequently headlines with “restore trust in Palm Bay. #integrity #responsibility”

In contrast, Deputy Mayor Kenny Johnson just launched his re-election campaign last month. According to his most recent campaign finance reports, he’s raised $32,465 but has yet to have a fundraising event. He’s been focusing on community town halls and informative briefings to residents prior to doing any serious campaigning.

When asked about the attacks of Fine, Johnson stated, “it’s nothing new and sadly it’s expected.”

Fine launched the exact same attacks of Johnson in 2018 when Johnson heavily defeated incumbent Tres Holton who was in the midst of an FBI/FDLE investigation while working with Fine.

Although the election for Seat 4 in Palm Bay is currently scheduled for November, White frequently advertises the date of August 23rd as the election which would only occur if there were at least 3 people in the race. Currently there are not, but Fine has been known to put ghost candidates in races such as his own in order to split votes. It remains to be seen if that is the plan, but promoting the August election date may be a telegraph of such a move.

Alarmingly, Facebook activity also shows Nathan White being supported by Kapur PK who was found to be allegedly attempting to set up bribes for former Palm Bay City Councilman Brian Anderson through a developer. Kapur PK was caught as Anderson was acting as a confidential informant for law enforcement and wearing a wire. Kapur has been notably absent in politics since the arrest of the developer he was assisting, but appears to be making his way back on the scene.