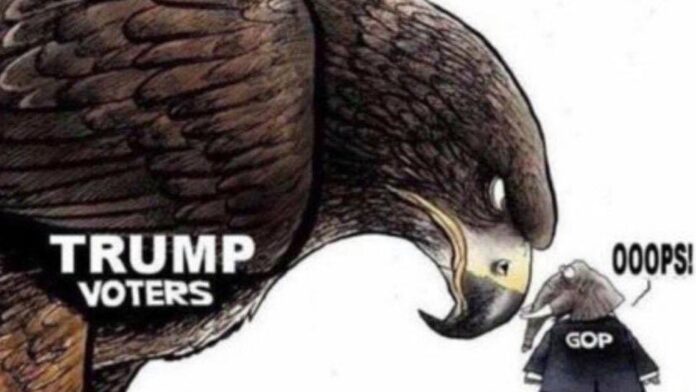 There are two kinds of elected Republican Trump supporters; those that need him, and those that fear him. Some politicians are both. Most don’t necessarily agree with his policies, or frankly, can even tell you what they are. He’s a registered Republican and so are they. For most, that’s where the commonality ends.

For private citizens however, there is one main reason they are Trump supporters. It’s not because they fear him, they don’t need him to get elected or raise money, and they probably can’t tell you much about his policies either. For them it’s not so much the what or why he does what he does, it’s the how he does it.

Trump’s appeal to his base is his no holds barred, nonpolitically correct (sometimes even morally correct), off-the-cuff, cut-throat, borderline bullying at times, demand for what he wants done, and when he wants it. He has fired some of the most powerful people on the planet in a tweet. (The best people)

He is not a diplomat. He’s honestly (despite his claims otherwise) not even a good negotiator. He simply makes demands, and you either abide by them, or you don’t. If you don’t, you pay the price. Love him or hate him, he is who he is, and half the nation has signed off on accepting him that way after 4 years of watching him in action.

So his base is solid. His support among elected officials…not so much. As we’ve seen since the election, GOP officials are showing a noticeable divide. Some showing their loyalty to Trump to the bitter end, and beyond. Others are trying to do damage control to what they themselves have contributed to; the damage of the core conservative values of the Republican party, as they see the proverbial writing on the Twitter wall.

But if we’ve learned anything about Trump, he loves walls, and if you’re not with him “you’re going to pay for it.” Trump isn’t going anywhere anytime soon. Already floating the idea of a 2024 run, and threatening to launch his campaign concurrent with Biden’s inauguration in January. Also the speculation of his daughter Ivanka running for a Senate seat in Florida of her own trying to trump Marco Rubio. President Trump and his brand are here to stay, and so are his voters; whether from trailer parks, or Park Avenue.

Which sets the stage for a new MAGA Party. No doubt true Republican’s are going to try and get back to the fundamental principals of their party, but I believe the congregation is leaving the church. Trumps ‘congregation’ follows Trump, not the gospel. Wherever he goes, they go, and it’s identical to when we see a church split into another. It’s how you go from Allen Chapel AME Church to GREATER Allen Chapel AME Church. Sound familiar?

Some, if not most members of a congregation will follow a flawed yet charismatic preacher to another church, despite his actions or teachings. Why? Because man can he preach. Same thing here. You can literally replace Joel Osteen on his own stage with Donald Trump, and it will look identical to a Trump rally.

The Republican party isn’t going anywhere, but it may have to endure its self inflicted fate of demotion to a minority 3rd party. In fact, it may have made itself just a descriptor of the type of MAGA party voter you are. Are you Republican leaning MAGA, or are you Democrat leaning MAGA?

Trump has the money (he’s raised nearly $200 million POST election), he has the supporters (70 plus million votes), and he has the voice (80 plus million followers on Twitter). What do you have? If it’s not a red hat, it better be a hard one, because the artillery is coming. Trump demands loyalty, and if you left the congregation, then you may find yourself on the receiving end of what you said you loved about him. The counter punch.

The next round of GOP elected politicians may look very similar to contestants on The Apprentice, where Trump can either make you or break you. Look no further than Georgia for the next 7 days for a sneak peak of the upcoming season.