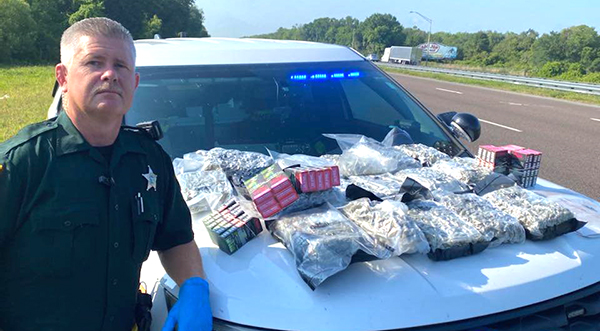 SHERIFF IVEY: “If you’re gonna sell drugs at least be smart enough to move over when you see a deputy with a car stopped on I-95.”

BREVARD COUNTY, FLORIDA – So this guy right here decides he is going to haul around a bunch of drugs in his car and then not be smart enough to move over for the safety of one of our Deputies who had a car stopped on the side of I-95.

Apparently he didn’t realize that we strongly enforce Florida’s Move Over Law in Brevard County, so Deputy Jason Lewis conducted a traffic stop on the vehicle being driven by Anthony Diaz out of Katy, Texas.

While Deputy Lewis originally intended to issue Diaz a citation for the infraction, during the course of the traffic stop he discovered approximately 17 pounds of marijuana that were individually packaged in 1 pound amounts as well as 130 grams of THC wax that was also packaged for sale and delivery.

As if being a drug dealer is not bad enough, Diaz put our Deputies at risk and the citizens who were stopped on the side of the road because he couldn’t obey our Move Over Law that is designed to keep everyone safe during traffic stops and roadside issues.

I’m willing to bet he wishes he had moved over but even with that I hope he enjoyed his ride to the Brevard County Jail where I’m sure he will find the accommodations to be less than pleasant.