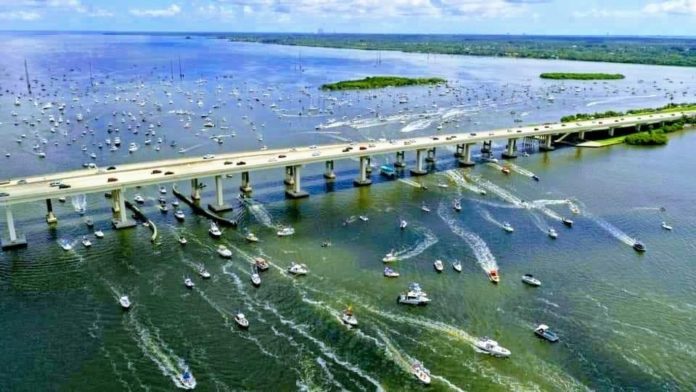 A growing trend in Florida has now reached the Space Coast as thousands of Trump supporters hit the Indian River in their boats to show their support of the President.

Starting at 11am from various locations, boaters took to the water in various boats and jet-skis with Trump flags and other adornments on display.

Supporters posted Facebook live videos and photos from all over.

The celebration wasn’t limited to the water however as those who chose not to go out on the boat lined the shores and causeways waving their flags and watching the parade.

Grant-Valkaria resident Marcie Adkins who is running as a Republican against Randy Fine for State Representative showed up in her “Marcie Mobile.” A military Hummer with Trump flags and her own campaign flags as well.

This parade is the latest of several that have gone on in Florida since May. President Trump himself has retweeted videos from the events.

Parler is back online; here’s how

Trump releases statement after being acquitted by the Senate; foreshadows future

Awful but lawful. State Attorney announces no charges for BCSO Deputy who shot and...

Man without pants arrested after bringing gun onto school grounds