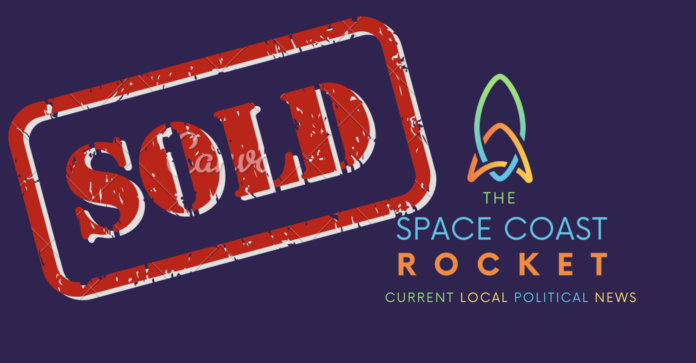 This will be the final article under the current ownership.

Tribune Publishing, owners of the Orlando Sentinel and the Sun Sentinel (South Florida) have purchased this publication, The Space Coast Rocket, after just over 1 year of existence.

Tribune Publishing purchased the publication for $430,000 from its owner Robert Burns with a 2% royalty on all future advertising for the next 15 years.

Burns started the publication with the goal of informing the locale typically not following politics on local politics that are impactful to their daily lives.

This exchange come on the heels of the news of both of Tribune’s papers in negotiations to be bought out themselves.

In an attempt to prevent the Orlando Sentinel from being sold to hedge fund Alden Global Capital, two Florida businessmen have said they’re interested in buying the 145-year-old Orlando newspaper to keep it in local hands.

One of them, Mason Slaine, a former CEO of Thomson Financial, has expressed interest in buying both of Tribune Publishing’s Florida papers, the Orlando Sentinel and the Sun-Sentinel in South Florida, where he lives.

The other, Craig Mateer, founder and former owner of Orlando-based baggage-handling company Bags Inc., said he was primarily interested in the Orlando Sentinel — a newspaper his father worked with in its very early years.

Slaine, who owns a 3.4 percent stake in Tribune, said he was prepared to contribute $100 million toward a deal being spearheaded by Stewart Bainum, a Maryland hotel magnate who has put a $650 million bid on the entire company.

Bainum’s offer came after Alden, which owns 32 percent of Tribune’s shares, reached an agreement to buy the newspaper chain for $630 million — a bid which last week Tribune’s board recommended shareholders approve.

Alden’s bid has worried many inside and outside of Tribune newsrooms since the hedge fund has a history of shrinking the number of employees at newspapers it acquires.

“I am a Florida resident and I believe heartily in strong investigative journalism as a necessary part of creating a safe and honest society. I consider papers such as the ones that Tribune owns in Florida to be a sacred public trust,” Slaine wrote in an email to a group of Orlando Sentinel reporters who contacted him. “The journalists should help safeguard the community and in turn the community should support the publishing platforms.”

Mateer did not disclose how much money he would put up, but said it would be in the ballpark of other offers.

“I’ve offered to be the Orlando arm or the Orlando purchaser if there’s interest in spinning it off to someone local,” Mateer said. “I think having a local paper that understands local interests and concerns is important, and I’m a supporter of that.”

Clayton Irwin, a representative for Tribune Publishing’s special committee reviewing Alden’s bid, declined to comment on the proposals offered by Slaine and Mateer.

The Orlando Sentinel Guild, a group of the paper’s journalists who unionized last summer, said it was “elated” to hear of other interested buyers. They come after the Guild, in partnership with the guilds from Tribune’s other papers, launched the “Save Our Sentinel” campaign to look for prospective buyers and educate the community about Alden, described by journalists as “the destroyer of newspapers.”

“Our hardworking journalists already are stretched thin and we can’t afford to lose any more reporters, editors or other members of our newsroom,” the Guild said in a statement. “But we are now hopeful the Sentinel won’t suffer the same fate as other Alden-owned papers. Mr. Slaine, a current Tribune shareholder, appears to share our commitment to journalism and has the means to free us from Alden’s grasp.”

The Guild invited other community leaders to step forward and “help save local journalism.”

Mateer said he hasn’t discussed the deal with Slaine or Bainum, but is well-positioned to back them financially. He was the sole owner of Bags Inc., which operated in airports across North America, and in 2018 sold the company for $275 million. He also owns several Church Street properties in downtown Orlando and was recently appointed by Gov. Ron DeSantis to the board that oversees Orlando International Airport.

Mateer described himself as “an old school Orlando guy” who believes it’s important for his hometown paper to have a newsroom downtown and for the journalists who work there to be fairly paid.

For him, the Orlando Sentinel was a significant part of his childhood. His father William “Bill” Mateer was the attorney for Martin Andersen, the newspaper’s former longtime owner and publisher. Mateer said he remembers going to the movies with his dad and, in the time before beepers or cellphones, a message would flash across the screen if the Sentinel needed to contact his father to review an article.

Bainum’s search for other investors started after he attempted to purchase the Baltimore Sun for $65 million, at the same time Alden was finalizing its deal to buy all of Tribune. He later announced he intended to buy the entire company.

If you’ve made it this far into the article; thanks for being a dedicated reader and enjoy the rest of your April fools day. We hope you enjoyed this prank.

Hansjörg Wyss, a Swiss billionaire and former executive of the medical device manufacturer Synthes, last week announced he was committing $100 million to Bainum’s bid. Wyss is mostly interested in acquiring the Chicago Tribune and told the New York Times he believes he can help it become more profitable.

According to a report in the Wall Street Journal, Bainum was open to including Slaine in the deal and possibly selling him the Tribune’s Florida papers.