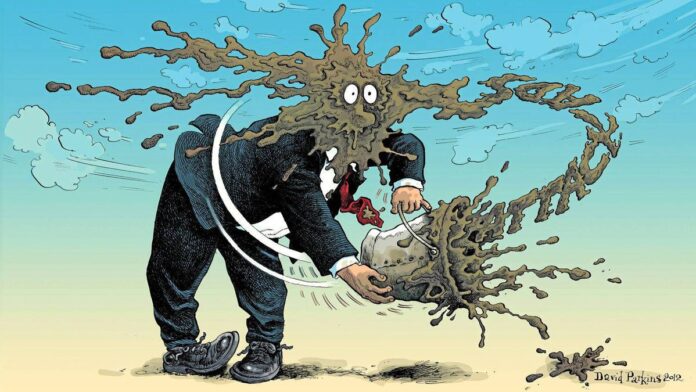 As the end of the election cycle approaches, robo-text messages start hitting voters cell phones. Early on, most messages are asking for support and donations from candidate campaigns themselves. However, the closer election day gets, the nastier messages start to appear. Brevard County is very familiar with such messages.

Over the last few days, residents have been posting screenshots of texts they’ve received that are bashing political opponents with often misleading, or even false information. Frustrated voters that are tired of receiving such messages often find out that there’s not much they can do to stop from getting them in the future. The messages are most likely received from a temporary number or code used exclusively to send the message out.

The most recent messages Brevard voters have received however, have the legal disclaimer at the end of the message identifying who paid for the text. We are aware of at least 3 cases in the last couple of days. Messages have gone out against School Board Candidate Gene Trent, State Representative Randy Fine, and Palm Bay Deputy Mayor Kenny Johnson.

The messages (which we will not publish) against Gene Trent and Randy Fine came from the same organization. The Elections Communications Organization (ECO) “Elections Matter FL” sent out messages today attacking both Trent and Fine. According to public records, the ECO is ran by Andrew Dodge. Andrew is the husband of Danelle Dodge, who ran for the Democratic nomination for U.S. Congress District 8. She was defeated in the primary election. Paperwork filed with the Florida Division of Elections shows that Andrew attempted to start the ECO in September but the application was rejected for being incomplete and on the wrong form. It officially started on October 7, 2022 and has raised $250 according to its most recent reports.

One of the most inflammatory and misleading lines in the messages against both candidates was “seen with underage minors.” Besides the obvious point that all minors are “under-age,” it appears to be an off-putting attempt to imply that the candidates are involved in some sort of inappropriate relationship with minors. Neither candidate has ever been accused of such things.

Gene Trent who has been a teacher for over 20 years has obviously been “seen with minors.”

Trent’s opponent Erin Dunne’s team stated that they were unaware of the text message until it was forwarded to them by someone who had received it.

“The text did not come from our campaign. Frankly there are enough concerns with the two investigations into Trent’s employment record that any additional unfounded claims are a distraction. Our campaign is focused on the real issues facing our schools and putting Brevard County students first.”

Palm Bay Deputy Mayor Kenny Johnson was also targeted on Thursday. The message included much of the same false and misleading information that Palm Bay residents have become all too familiar with, from never-ending attacks from State Representative Randy Fine. Although Fine has been responsible for many defamatory mailers, robo-calls, and text messages against Johnson in the past, this time it came from a newly formed organization called “We the People” PAC owned by Space Coast Young Republicans President Josiah Gattle.

We the People PAC’s address is the same as Josiah’s UPS Store in Rockledge. Nathan White, who is running against Deputy Mayor Kenny Johnson is an employee of Josiah at the very same store. White’s campaign finance reports show nearly $2,000 in in-kind contributions from Josiah’s UPS Store’s, immediately followed by a $500 check from “We the People.” White has said repeatedly that he has nothing to do with the many negative hit pieces and ads that have come out against his opponent Deputy Mayor Johnson, and that he’s committed to running a clean campaign.

The top 3 donors for the We the People at $5,000 each are “Conservatives for Good Government,” a PAC chaired by Senator Debbie Mayfield, owner of the American Muscle Car Museum Mark Pieloch, and Melbourne Mercedes Dealership owner Seamus Rowe.

It’s unknown if those contributors to the PAC would understand that their money would be spent in these ways. What is known is that these types of tactics often annoy voters more than sway their votes. There’s a lot of data that shows that negative ads are effective. State Representative Randy Fine often states that. However, negative ads in the form of text messages often have outcomes opposite of the intent. Voters simply do not like being force-fed political advertising to their cell phones. It is also these kinds of politics that discourage voters from participating in politics by principle alone.

Brevard Democratic Chair Pamela Castellana told us when asked about the messages, “This is the first I’ve seen or even heard of this message, which seems grossly overreaching in the least. While I don’t see anything in the message that is factually inaccurate, one would expect a former teacher to be found in the company of minors (who are, by definition, under age), this kind of attack is truly unnecessary.
It’s bad for democracy when these attacks escalate in this manner. Trent’s campaign has officially accused his opponent of sexual predation and worse, starting this kind of low blow warfare. I can say with full confidence that this messaging did not come from our organization.”