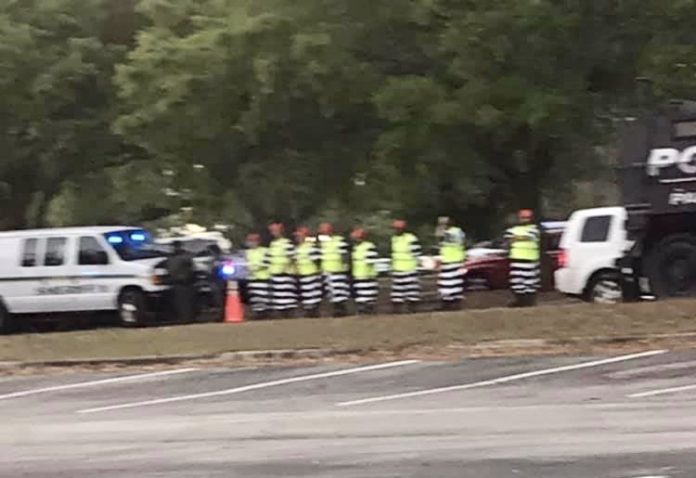 Yesterday was the last of 4 parades Sheriff Wayne Ivey decided to put on for citizens to “get out of the house” and build morale. The final drive through parade was at Eastern Florida State’s Palm Bay Campus. The parade featured many of the Sheriff’s assets on display and large fire trucks.

The events drew criticism from citizens and elected officials as further evidence of the conflicting messages being communicated from elected officials. The sheriff assured that this was a safe way to get out and measures would be taken to eliminate the risk of spreading the virus. However, as seen in photos and videos from all 4 of the events, that was not the case. Deputies, officers, and first responders were all seen within the guidelines set for social distancing of 6 feet and gathered in groups.

Deputies were seen handing out hundreds of stickers to children without gloves and without sanitizing in between children. This practice itself could have spread the virus from one child to every single child that got a sticker from this individual.

The last display in the parade was the bomb robot handing bags of candy to children in their cars. Photos showed children reaching out for the candy touching the robot’s gloved “hand.” There was no sanitizing of the robot in-between vehicles. Another obvious vector of spreading the virus.

Alarming to several participants was the display of inmates in the “chain gang” who were seen and photographed from participants. The inmates were used for the logistics of setting up the parades. Many felt it was improper and shaming to the inmates.

In the same press conference announcing the parade, Sheriff Ivey stated that he would not be releasing any inmates charged with non-violent crimes as has been the approach of other counties in the state to reduce risk. He went further to say that in jail was the safest place for them to be and CDC guidelines were being practiced. Photos at the parade, show the inmates shackled together and touching one another.

Just hours after the County Commission and the Sheriff stated that there were better uses of resources for his department than policing beaches, this parade kicked off showing a tremendous amount of staff and resources for the event.

“I think all elected officials should be encouraging folks to stay at home when they don’t otherwise need to be out,” said state Representative Randy Fine, adding “If we have first-responders who don’t need to be first responding, I would hope we would encourage them to be social distancing as well.”

“I appreciate what’s trying to be done but I don’t think we should be telling people out of one side of our mouths to stay at home if at all possible, and, out of the other side of our mouths: come to a parade,” Fine said.

Palm Bay declared a state of emergency a week ago effectively cancelling all events. This event was announced after the declaration and according to Mayor Capote, the city had the authority to not allow the event. Mayor Capote stated “not only did the City Manager not disallow the event, she chose to use our city resources to participate in it.”

Monday, Mayor Capote called for her resignation citing what he believes as her mishandling of the response to the pandemic.

This morning Palm Bay also announced the opening of the Fred Poppe Park Dog Park. The profile picture in the post says to “stay home.”

Residents throughout the county continue to express frustration with the confusing and conflicting information being disseminated from the County and the municipalities.

Thursday the County closed all beaches to the public during specific hours only to reverse the decision hours later. After that, beachside municipalities decided to close their own beached instead.