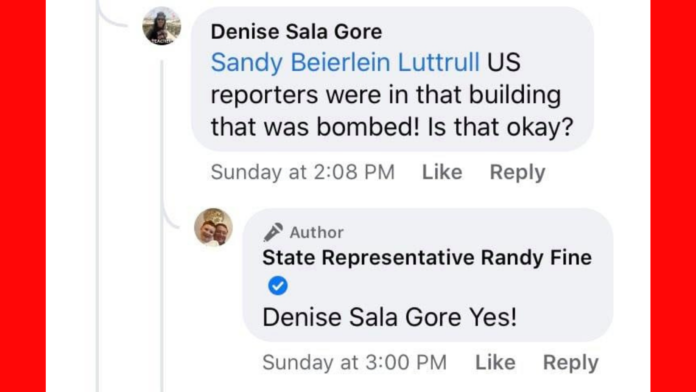 On May 15th, Florida State Representative (Republican-Palm Bay) shared a letter calling for peace from the Florida Legislature Jewish Caucus on his official Facebook page. While stating he stands with his colleagues who called for peace, he contradicts them in the most direct way by calling for war.

When asked about rights to defend their homes, he responded with #blowthemup.

Finally when asked by a constituent if it was ok to blow up a building in Palestine that contained United States citizens and reporters in it, he directly responded “yes!”

It appears that Fine is trying to incite and advocate for more violence and bloodshed while his peers call for peace.

ABOUT US
Your only dedicated source on the Space Coast for current local political news. Get facts, ask questions, get answers.
Contact us: editor@thespacecoastrocket.com
FOLLOW US
© 2020 The Space Coast Rocket - All Rights Reserved Designed by The Social Wizards
MORE STORIES
Car Accident