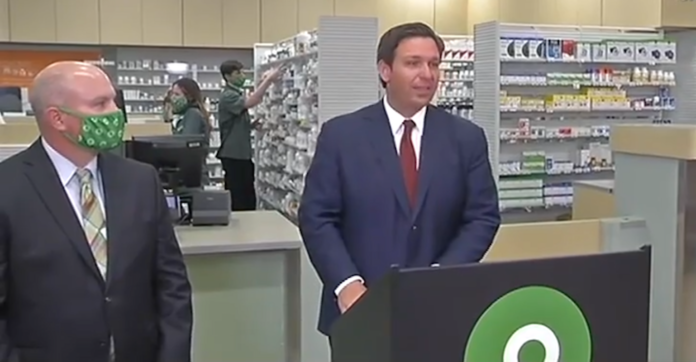 As frustrations continue to rise over the botched rollout of the Covid-19 vaccination program, Desantis is pulling doses that would have gone to Department of Health vaccination sites, and giving them exclusively to Publix to administer.

Residents have expressed anger over system crashes for appointments, misinformation, and unclear guidelines for who can get the vaccine.

Desantis partnered with Publix with what originally appeared to be a supplemental program to ease the burden, and increase availability. However, the partnership is evolving to something else. Publix has reportedly stated that each location can handle about 100-125 appointments per day they are administering the vaccine, far less than the Health Department sites. Yet the governor is effectively closing those sites down as he diverts the limited supply to Publix pharmacies.

Appointments for Publix can only be made online which has been a major complaint for the elderly “Seniors First” population, who a large amount do not have computers or smart phones to book these appointments. Many are relying on younger family members to attempt to book the appointments on their behalf. When the website opens for availability is also a complaint as Publix starts the booking at 6am, with they claim over 300,000 people trying to access the site at once.

The website is confusing to most as people are sitting in a holding que waiting to actually get to the booking site, but it’s not intuitive or clear that you are actually in line. Residents reported sitting on the site for hours unsure of what to do, only to find out that all the appointments were booked completely hours before they realized it.

There has been much scrutiny as to why Desantis has chosen Publix exclusively over other major pharmacies like Walgreens, Walmart, CVS, as other states have.

In December, Publix donated $100,000 to the Friends of Ron DeSantis political action committee, as reported by the Miami New Times. DeSantis’ office denied that the donation played any role in Publix receiving its vaccine role, telling the Lakeland Ledger that those claims were “baseless and ridiculous.”

In a press release yesterday, Publix announced that individuals needed to bring their insurance cards with them to their appointments. Many asked why this was since the vaccine is supposed to be free. Although it is of no cost to the consumer to go and get the shot, Publix is billing insurance companies for payment.

For seniors on Medicare, Publix is reportedly being paid for a COVID-19 vaccine requiring a series of 2 or more doses, the initial dose(s) administration payment rate of $16.94, and $28.39 for the administration of the final dose in the series. A total of $45.33 per patient. (Info provided by CMS.gov)

Florida has 4.5 million seniors over 65 which would theoretically equate to $204,000,000 in payments from Medicare or other private insurance companies.

Brevard County Communications Director Don Walker said that the County Commission just approved expansion that enables the County to administer up to 20,000 doses per week, separate from Publix. However, if Desantis decides to do in Brevard what he’s done in Palm Beach County, none of that will matter as he’s determined Publix will administer the vaccine exclusively.

There are a total of 22 Publix locations in Brevard County that are administering the vaccine. If all the locations administered 125 per day as stated, that gives them the capacity to vaccinate 2,750 people per day in comparison to the county.

Bill Johnson, the County’s Director of Emergency Management says that Palm Beach County has the infrastructure to administer up to 75,000 doses every week. But they will no longer be receiving the doses from the state as they will all be allocated to Publix which has less capacity.

Palm Beach Commissioners are planning to write a letter to DeSantis asking him to reconsider this exclusive partnership with Publix and allocate more doses to Palm Beach County for distribution.