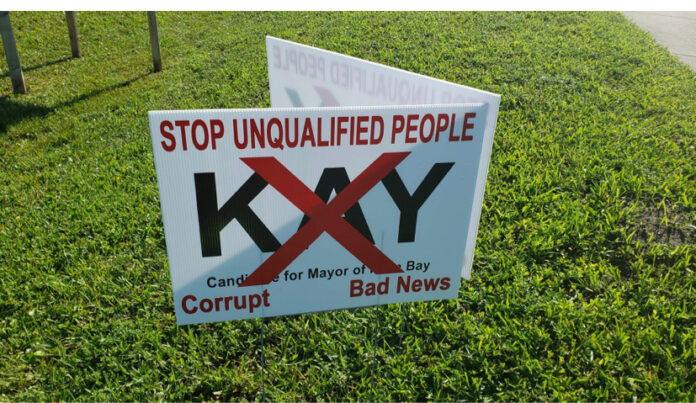 The owners of Thrifty stated that they were not asked for permission by anyone to post these signs on their property and quickly removed them once made aware.

The signs were placed right next to an actual campaign sign in support of Kay. Once elected, Kay would be come the first elected woman for Mayor of Palm Bay in the city’s history.

Paid political advertisements and signs are required to have a disclaimer identifying who paid for them according to Florida law. These signs did not have the required disclaimers. Without the disclaimer, it could be interpreted as an in-kind contribution to the Medina campaign, and a complaint could be filed if not reported in campaign finance reports.

In response to the signs, Kay says she is disappointed, but not surprised. She said she wants to bring our community together with positivity, and rid Palm Bay of the divisiveness and negative headlines of the past. Unfortunately, there are some who disagree.

This is Kay’s first time running for office. She is a Democrat, and describes herself as moderate, and fiscally conservative.

Medina is a Republican who currently works for Congressman Bill Posey as a staffer. He has stated he will decide if he will continue to work for Posey’s office if elected when the time comes.

This is his second time running for office. In 2016, Medina ran for District 5 County Commissioner against Kristine Isnardi, losing to her by 19 points. Medina has received several endorsements this go-around to include an endorsement from Sheriff Wayne Ivey.

When asked for comment about the negative signs, Medina did not respond.

Today in Palm Bay, signs appeared that viciously attacked mayoral candidate Kay Maragh without even a shred of evidence to support their ridiculous claims. Of course, the cowards who posted them didn’t even bother to include a disclaimer to indicate their origin.

Clearly, Medina’s supporters are scared of this strong, successful woman. And they should be.

Kay Maragh is a real estate agent, small business owner, and mother who has served on Palm Bay’s Planning & Zoning Board as well as the Community Development Board. Kay has over 15 years of sales & marketing experience, serves as the Vice President of the Brevard Caribbean American Sports & Cultural Association, and has served in several volunteer roles in our community. Her professional experience coupled with her roles in local government and community service make her an incredibly qualified candidate for Palm Bay Mayor.

While her opponent is also experienced, voters should consider the right-wing Republican values he’s been serving. Medina has worked for years in support of a Congressman who has voted:

*AGAINST extending housing & childcare assistance in response to COVID-19;

*AGAINST raising the minimum wage;

*AGAINST expanding the Affordable Care Act;

*AGAINST establishing a path to conditional permanent residence for DACA recipients (i.e, Dreamers).

Palm Bay is a beautiful, growing city that needs a breath of fresh air, not a right-wing politician who’s deeply connected to the politics of the past.

According to the latest campaign finance reports, to date Medina spent $32,983 to Kay’s $9,911 in their bids for the seat, yet only 1,000 votes separated them in the Primary election. Medina spent $3.08 per vote to Kay’s $1.08. If Kay is able to raise funds, we should see an extremely close race as she’s proven to be able to spend her dollars more efficiently.

The current Mayor, William Capote is termed out and cannot run for re-election.

Capote will face Commissioner Kristine Isnardi in November for the County Commission seat.