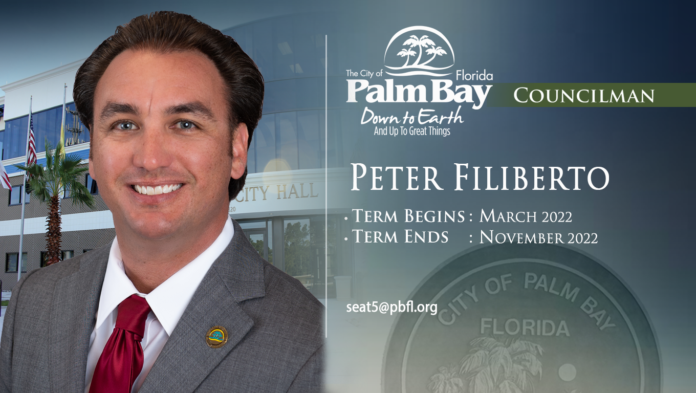 Correction: Previous version of this article stated the term limit was 8 years. It is 12 years.

Today at noon was the deadline to file for the 2022 election. Newly elected Palm Bay City Councilman Peter Filiberto who recently won the Special Election (by a landslide) to fill Jeff Bailey’s vacancy, was the only candidate to qualify for the 2022 election for his seat.

As a result, Filiberto will be re-elected for his now 2nd term to seat 5 for Palm Bay City Council. In his short tenure on the Council, he has proven to be very popular with the residents of Palm Bay. Due to Florida law however, this term for Filiberto will count as a full term. According to state statutes, a partial term, no matter how short, counts as a full term in office. So Filiberto’s term which began in March of this year that will conclude in November, will essentially count as a 4 year term. A candidate cannot run for a term that if at the conclusion of the term it would exceed the term limits for that office.

Palm Bay has term limits for City Council of 12 years (3 terms). Filiberto will only be allowed to run for re-election one more time, otherwise he would exceed the 12 year term limits by 8 months, thus disqualifying him for eligibility.

That leaves the only race for Palm Bay this upcoming election for the re-election of Palm Bay’s Deputy Mayor Kenny Johnson in November.

Major internet outage takes down sites like Amazon, Delta, Olympics, Playstation and others