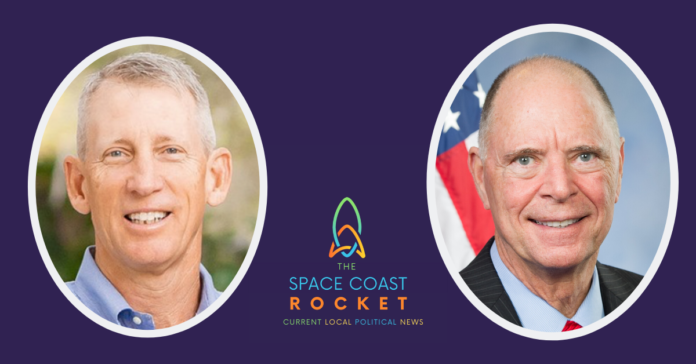 Commentary from The Orlando Sentinel

Incumbent Republican Bill Posey might have skipped our interview because he feels comfortable in the congressional seat he’s held since 2008.

He ought to be feeling some discomfort in this Republican primary. Posey faces a challenge from Scott Caine, a retired Air Force fighter pilot who’s offering voters in this district an appealing alternative.

Caine checks a lot of boxes, not least of which is 30 years of military experience that included command-level assignments that prepare him for making informed and intelligent defense and foreign-policy decisions.

He has deep roots in the district, which covers Brevard, Indian River and a portion of east Orange County. He grew up in Vero Beach and kept a home in the district while serving in various places around the world.

Politically, Caine has solid conservative bona fides, a must in a district where Republicans outnumber Democrats by some 70,000 voter registrations. He’s clear-eyed about the economic threats from China and the real threat from North Korea, and he seems determined to do something about the increasingly crushing burden of our national debt.

But Caine takes a refreshingly broad view, for example, on individual rights. While many GOP candidates thump their chests solely about the Second Amendment, Caine speaks to defending the broad array of rights the founders thought were vital to a free republic, like the First Amendment.

Caine provides some fresh blood in a district that could use a good leeching.

Posey’s been in office 12 years — long enough. While he brings a lot of institutional knowledge to the table, he functions largely as a reliable vote for both President Trump’s policies and for keeping the president unaccountable for his actions. Otherwise, he’s something of a non-entity.

Republican voters in Florida’s 8th District need to seize the opportunity to help Congress get a fresh start with Caine as their representative.

Your support has earned us this big endorsement from the Orlando Sentinel!

The American spirit is being tested now more than ever. We’re battling a global pandemic and economic slowdown. As a fighter pilot and senior leader in the Air Force, I wasn’t trained to cower in fear … and I know you don’t do that either.

When the Orlando Sentinel called and invited me to an editorial board interview, I jumped at the chance to discuss challenges and opportunities facing us as a nation. Meanwhile, my opponent, Bill Posey, decided he didn’t want to be held accountable for reversing his commitment on term limits and skipped the interview.

As a result of our interview, the Orlando Sentinel has strongly endorsed our campaign to change Washington and remove career politicians.

The editorial board cited my 30 years of military experience and roots in the community as reasons to back me in the Republican primary.

This endorsement is exciting because it marks yet another milestone in our insurgent campaign.

The next marker comes in just a few days as the world will judge us on our fundraising numbers.

Thanks to many of you, we surpassed the $100,000 raised measure recently and we need your help once again to show that the Space & Treasure Coasts are ready for change.

Your donation now will send a strong message to career politicians like Posey and others that they have to be accountable to you and me as citizens.

Join us in this fight and let’s get Washington working for the people instead of their own special interests.

P.S. Help us build on this momentum and join our movement NOW to show the world that Florida is ready for fresh faces and not the stale ideas from the Ford Administration.