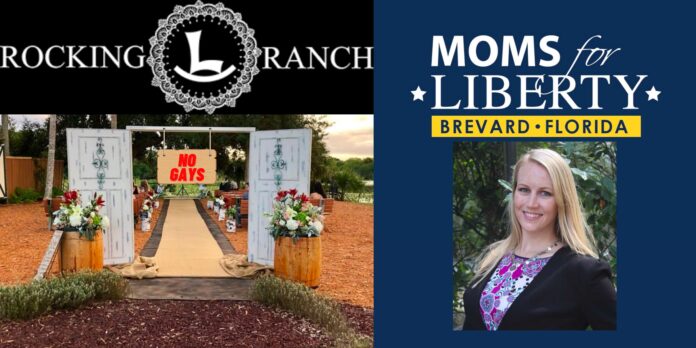 Ashley Hall is the Chair of the Brevard Chapter (the original Chapter) of the national group Mom’s for Liberty. Her LinkedIn profile shows that she was the Operations Manager for The Rocking L Ranch in Cocoa, FL. Susan Landfried is listed as the owner of the wedding venue who is also Ashley’s mother.

The beautiful Cocoa venue offers a wide variety of wedding packages and options for its patrons, specializing in “All Inclusive Rustic Barn Weddings.” However, according to multiple business reviews, responses from the business to those reviews, and a policy posted on their Facebook page, they will not serve members of the LGBTQ+ community.

The disclaimer listed on their Facebook page does not specifically point out the LGBTQ community, but states they reserve the right to refuse service that “would require the entity to engage in conduct that conflicts with its owners’ sincerely held religious beliefs.” All of the negative reviews are only related to refusal of service from same sex couples. Whether or not the venue allows ceremonies of couples with children out of wedlock, previous divorces outside of adultery, criminal history, or any other actions viewed as sins in the Christian religion is unclear.

The venue has disabled and removed reviews from it’s Facebook page, and has asked people not to leave or rely on reviews on Yelp. They do however have many positive reviews on Google, averaging 4.5 stars. Those who they do choose to serve seem to be extremely satisfied with the service received. In some instances however, even straight couples left negative reviews after finding out about their policy against same sex marriages.

Amanda Nye was a patron who was refused service at Rocking L Ranch in January 2015. She says when she inquired about the wedding for her and fiance’ Beth, the owner Susan asked her if they were gay. Landfried informed Amanda that they don’t host gay weddings at Rocking L Ranch.

“She said, ‘And not only do we not do gay weddings, but that’s against God’s word. I don’t even want you stepping foot on my property,’ and she hung up on me,” Amanda says.

Landfried then emailed Amanda and told her she was wrong to get married to a woman and that she would go to hell for it.

“I was really pissed and I was really hurt,” Amanda says, and then Landfried continued to email her.

Here’s an excerpt from a Jan. 8, 2015 email: “We are happy to host dinners, birthday parties, or just about any other kind of event regardless of a client’s sexual orientation, but not a same-sex wedding. I don’t want to discriminate against anyone, but my conscience will not allow me to use my business to facilitate an event that contradicts God’s design for marriage.”

Amanda says she was extremely upset and had never faced discrimination like that before.

“It made me second guess me as a person,” she says. “Eventually I came to and said, ‘Screw this, I love my wife, I love Beth, I’m not going to let [Landfried] get the best of me.’”

Many feel that the organization Moms for Liberty has been on an attack against the LGBTQ community. The Brevard Chapter’s Facebook page features a post about removal of books from public schools that mention LGBTQ+, and transgender stories.

It also features a video from Governor DeSantis’ page of a press conference with January Littlejohn who claimed that school officials manipulated her daughter to “transition,” calling her a male name and pronouns with her parent’s consent. A public records request of emails between January and the school showed that story to be false.

In an August 27, 2020, email to a teacher, Littlejohn stated, in part, “This has been an incredibly difficult situation for our family and her father and I are trying to be as supportive as we can. She is currently identifying as non-binary. She would like to go by the new name [redacted] and prefers the pronouns they/them. We have not changed her name at home yet, but I told her if she wants to go by the name [redacted] with her teachers, I won’t stop her.

“The teacher thanked Littlejohn and asked if she should share with other teachers.

Littlejohn explained it was difficult and confusing, and went on to write, “Whatever you think is best or [redacted] can handle it herself.”

In another email the same day, Littlejohn told the teacher, “This gender situation has thrown us for a loop. I sincerely appreciate your support. I’m going to let her take the lead on this.”

The main Moms for Liberty Facebook page features a post that categorizes those who are transgender as a “dangerous growing trend.”

The discussion about LGBTQ+ issues in public schools has become a polarizing and divisive debate, with children often being the ones who suffer. The differences seem to stem from multiple reasons, from religion for some, personal beliefs of others, and claims of science. Moms for Liberty says “It is not okay to label everyone that has concerns on this issue a bigot.”

For Rockin L Ranch, they make their position clear that their rationale is due to religious beliefs.

If you’re wondering is it legal for a private business to discriminate in this manner based on sexual orientation, the answer is yes….for now.

The Supreme Court declined to wade into the contentious issue of whether businesses have a right to refuse service for same-sex wedding ceremonies despite state laws forbidding them from discriminating on the basis of sexual orientation.

The court dodged the wedding question three years ago in a case involving a Colorado baker who said baking a cake to celebrate a same-sex marriage would violate his right of free expression and religious beliefs. The issue came back in an appeal brought by Barronelle Stutzman, owner of Arlene’s Flowers and Gifts in Richland, Washington.

The court said that it would not take up her appeal, leaving the state court rulings against her intact and again ducking the hot-button issue. Justices Clarence Thomas, Samuel Alito and Neil Gorsuch said the court should have taken the case.

Pete Williams from NBC News reports, Stutzman refused to provide flowers for the wedding of two longtime male customers in 2013, explaining that as a Southern Baptist, it would violate her religious beliefs and her “relationship with Jesus Christ.” Like the Colorado baker, she said her floral arrangements were works of art and that having to create them for same-sex weddings would trample on her freedom of expression.

The florist’s lawyer, Kristen Waggoner of the Alliance Defending Freedom, said other judges have ruled in favor of businesses claiming that they cannot be forced to create works that violate their religious beliefs.

“We are confident that the Supreme Court will eventually join those courts in affirming the constitutionally protected freedom of creative professionals to live and work consistently with their most deeply held beliefs,” she said.

Robert Ingersoll, who requested the flowers for his wedding ceremony, praised the Supreme Court for denying the florist’s appeal. He said he hopes the court’s action “sends a message to other LGBTQ people that no one should have to experience the hurt that we did.”

Ria Tabacco Mar, an American Civil Liberties Union lawyer who represented the gay couple, said the denial is a reminder that “no one should walk into a store and have to wonder whether they will be turned away because of who they are. Preventing that kind of humiliation and hurt is exactly why we have nondiscrimination laws. Yet 60 percent of states still don’t have express protections for LGBTQ people like the kind in Washington State. Our work isn’t over.”

The Supreme Court has agreed to hear a new clash involving religion and the rights of LGBTQ people in the case of a Colorado web designer who says her religious beliefs prevent her from offering wedding website designs to gay couples.

The high court said Tuesday it would hear the case of Lorie Smith. The Denver-area designer offers graphic and website design services and wants to expand to wedding website services, but she says her Christian beliefs would lead her to decline any request from a same-sex couple to design a wedding website. She also wants to post a statement on her website about her beliefs. Doing those things, however, would run afoul of a Colorado anti-discrimination law. Smith had argued the law violates her free speech and religious rights.

The Supreme Court said in taking the case that it would look only at the free speech issue. It said it would decide whether a law that requires an artist to speak or stay silent violates the free speech clause of the First Amendment. The case is expected to be argued in the fall.

Smith’s attorney, Kristen Waggoner, said in a statement after the court agreed to hear the case that “Colorado has weaponized its law to silence speech it disagrees with, to compel speech it approves of, and to punish anyone who dares to dissent.”

Colorado Attorney General Phil Weiser said the Supreme Court has consistently held that anti-discrimination laws like the one in his state apply to all businesses selling goods and services.

“Companies cannot turn away LGBT customers just because of who they are,” Weiser said in an emailed statement. “We will vigorously defend Colorado’s laws, which protect all Coloradans by preventing discrimination and upholding free speech.”