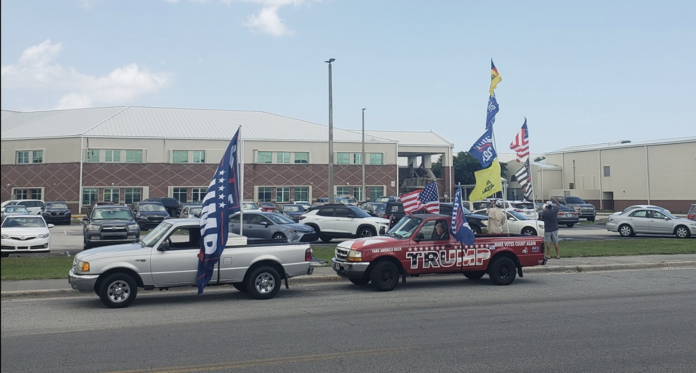 Parents received an email from Melbourne High School today informing them that the school had been locked down as a precautionary measure.

A message from Melbourne High School

“Melbourne High is currently on lock down due to police activity adjacent to our campus.  There is no immediate danger to our students or staff.  We have taken this action at the direction of the Melbourne PD out of an abundance of caution.  We expect to resume normal activities shortly. “

Students began texting their parents afraid, and believing it had something to do with the anti-mask protestors who for the last few days have been parked just outside the school property screaming at kids through a megaphone during class, telling them not to comply with the mask mandate.

According to Lt. Saddoff of the Melbourne Police Department, the police activity did not involve the protestors who were again at the school today, but was the result of serving a felony arrest warrant on a fleeing suspect in the area. The school was locked down as a precaution.

Student began making Snapchat videos during the incident stating that they were scared because they believed it had something to do with the protestors who they say have been threatening them for complying with the mask policy.

These protestors are some of the same ones who repeatedly show up to the private residence of School Board member Jennifer Jenkins reportedly stating that State Representative Randy Fine sent them there.

A court ruling today made mask mandates in school legal, while Governor Desantis appeals the ruling over the next 60-90 days.

More police officers have died from Covid-19 than all other causes COMBINED for 2020...