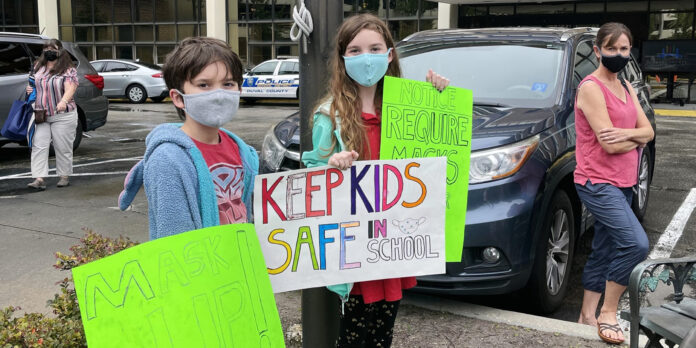 This morning, Leon Judge John Cooper heard augments on a “motion to vacate stay.” He decided the governor’s ban — requiring districts to offer parental opt-outs or face a financial penalty — be put on hold for at least the duration of a forthcoming court challenge in appellate court.

Attorneys challenging the ban say it would be a major victory as an appeal could last 60 to 90 days.

Judge John Cooper says everyone must abide by the laws of Florida, to include Governor Desantis. He stated that the Parents Bill of Rights, which was passed this year, DIRECTLY gives local schools the powers to implement a mask policy.

The state immediately filed for an appeal of the decision, triggering an automatic pause on Cooper’s order. The ban and financial penalties were allowed to resume for the 13 school districts who have decided not to comply with the ban.

He stated that there is no harm to the defendants (the State of Florida) if the ‘stay’ is set aside.

Desantis continues to defend the action as protecting a parent’s right to choose what’s best for the health and wellbeing of their children.

“Why don’t we just empower parents,” DeSantis said at a press event last Friday. “Let them make the best decision for their kids and I think it’ll end up working out.”

In his ruling, Judge Cooper stated this is about enforcing the laws the legislature passed. His order is effective immediately.

Florida’s Department of Education sent a letter to Brevard Public Schools announcing an investigation into their policy mandating masks with only medical exceptions. The letter demanded a response from the district this morning.

Florida Today reports, School Board Chair Misty Belford said Tuesday afternoon that the School Board’s general counsel, Paul Gibbs, was drafting a response to the letter. The district had no plans to change the way it enforces its mask mandate, she said, and the board did not intend to revisit the policy at its regularly scheduled meeting Thursday.

“(Gibbs) is of the opinion that we are working within the rule as well as the Florida statutes and the Florida Constitution, and he lays out the significant rise in cases in Brevard, the impact that it’s having on our schools, our students, their learning, our faculty, our staff,” Belford said. “So we will send that response tomorrow and then await further word from the DOE.”

State Representative Randy Fine touted about the letter from his Facebook page yesterday. Fine who is under multiple criminal investigations by the Florida Department of Law Enforcement stated that “you don’t get to pick and choose the laws you want to follow.” His most recent investigation is launched after he allegedly, illegally campaigned from his legislative office while on duty, and inside his office, live on video even after acknowledging he’s not supposed to do so.