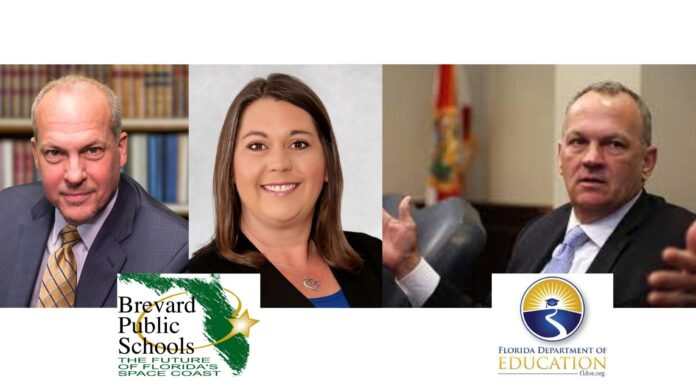 In a letter to Brevard Public Schools Superintendent Mark Mullins and School Board Chair Misty Belford, Richard Corcoran, the state education commissioner announced the school district is under investigation for its COVID-19 mask mandate, which only allows for a medical exemptions.

The letter states that the State is concerned about the violations against Emergency Rule 64DER21-12, which, according to the Florida Department of Education, requires that any mask mandate issued by a school or school district “must allow for a parent or legal guardian of the student to opt-out the student from wearing a face covering or mask.”

The emergency rule does not require parents to submit a doctor’s note for students to opt out of the mandate, though the district’s current mandate does require one.

“Recent reports in the media indicate that the Brevard County School Board has taken action inconsistent with the emergency rule by limiting or conditioning the parental ability to opt out of a face covering or mask mandate,” the letter read.

Corcoran noted there may be confusion among districts since a judge ruled against Gov. Ron DeSantis, who tried to block districts from issuing blanket mandates without easy opt-out options for parents, saying they violate the state’s Parents’ Bill of Rights.

The judge ruled such mandates are OK but DeSantis already appealed the ruling, placing a temporary hold on it all together.

“Your rationale may be based on Judge [John C.] Cooper’s recent order; however, at this point, an automatic stay is in effect,” Corcoran wrote. “This means the Department of Education may resume enforcement of the Florida Department of Health’s emergency rule. In the event the stay is lifted, then enforcement action will be automatically tolled.”

Brevard Public Schools must provide a written response to Corcoran’s letter by 8 a.m. Wednesday that details how the district is complying with the Department of Health’s rule.

If the school district does not respond in time in a manner that documents full compliance, Corcoran plans to “recommend to the State Board of Education that the Department withhold funds in an amount equal to the salaries for all the members of the school board” until the district makes changes to be in compliance.