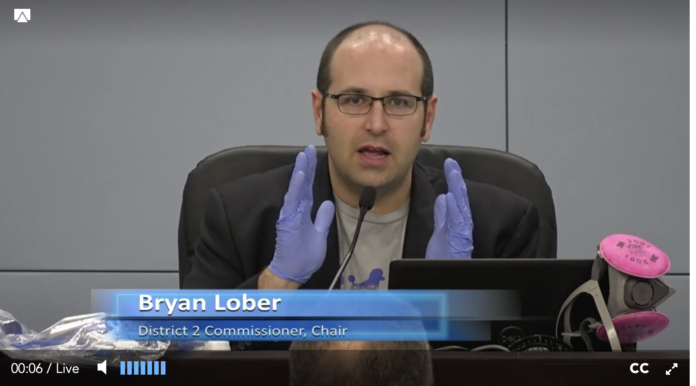 County Commission Chair Bryan Lober says he wants to make a condition for small businesses and nonprofits who want to receive CARES Act Federal Grants, that they must have a placard posted indicating masks are required in their business.

On June 30th, the Commission as a whole rejected Lober’s proposal that would have forced businesses to require masks. The measure failed 4-1.

Since then, some local Brevard municipalities have been implementing their own policies.

“While I genuinely believe that our failure to act on June 30 resulted in and continues to result in numerous wholly avoidable infections — some of which almost certainly have caused and/or will cause deaths — it is not too late to do something,” Lober wrote in memo he sent today to the other four commissioners.

“When your mother, sister or daughter is placed on a ventilator and dies from this, you will likely stop pointing to the low — I use the term ‘low’ with unease — percentage death rate, so as to suggest that it is acceptable,” Lober wrote. “While only a small percentage of the overall population has died due to this virus, any avoidable death is one too many.”

Lober’s tone has changed over the course of the pandemic. Early on, Lober down played the virus stating its nothing more than the common cold and not remotely as bad as a category 5 hurricane. Since those comments, Lober’s views have changed and he has been a strong advocate for increased government regulations, restrictions, and over-site on the issues. He has been in the minority of all his proposals even being forced to be replaced as the chair of the Emergency Managament Team by Commissioner Rita Pritchet.

The proposal will be voted on in tomorrow’s County Commission meeting scheduled for 9am.

Lober said he believes, by their June 30 rejection of his proposal, “simply did not wish to implement a government mandate, despite such a measure being unquestionably constitutional and despite it being irrefutably scientifically proven to reduce the spread of airborne viruses and, by extension, guaranteed to reduce morbidity and mortality.”