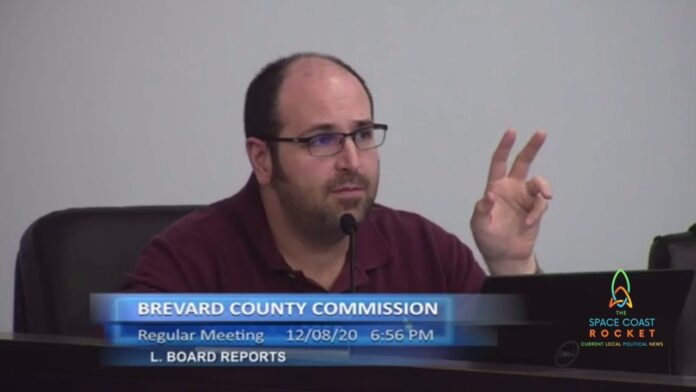 At the end of the County Commission meeting Tuesday evening, District 2 Commissioner Bryan Lober informed the board of some of his plans to allocate part of $5 million in CARES funding under his control. His presentation was very odd in that he invited a member from the audience to literally come and slap him in the face if he didn’t like something he proposed.

Equally as odd in what he called a “unique creation,” one of his decisions is to allocate $165,000 for Brevard County Fire and Rescue and patrol deputies with the Brevard County Sheriff’s Office (potentially 1100 personnel) paying each one of them up to $150 to get the Covid-19 vaccine.

He stated that the current vaccine takes 2 shots, and he wants to pay them $75 per shot in order to incentivize them to get the vaccine. This is a straight payment for getting the vaccine, and not to cover costs, if any, to pay for it. However, the cost is already covered for the vaccine, and first responders already have priority in receiving them.

The idea, along with others Lober proposed did not seem to be taken well. Most vocal about it was District 5 Commissioner Zonka who is a Nurse Practitioner. She stated we need to “stop the insanity” referencing Lober unilaterally handing out the money like candy to who he deems deserving. She said she didn’t want this to become a slush-fund for individuals, which it appears Lober is doing.

Lober has picked and chose his own specific organizations and charities he feels are deserving to disperse funds to. Just last week he drew his strongest criticism with a plan to issue bonuses or back pay, creating a ‘hazard duty’ pay for Brevard County firefighters for duties during the pandemic. There were 2 major issues with that proposal; one which was outlined by myself, and another by District 3 Commissioner John Tobia.

The issue I brought up was the legality of paying bonuses for work already completed in the past. That was a finding the the Palm Bay JLAC Audit and found to be illegal according to Florida Statute 215.425 (1) No extra compensation shall be made to any officer, agent, employee, or contractor after the service has been rendered or the contract made.

During the discussion, Lober acknowledged the point and stated he would modify his proposal to a pay date in the future, but even that may still be an issue. We will find out after the staff evaluates it.

Vice Chair Zonka, called the $1,500 payment a slap in the face to fire fighters and stated they were being used. She challenged Lober to up the amount or focus on their actual issues like adequate facilities and equipment. She, along with Commissioner Tobia, gave the $5 million each allocated to them completely to the public safety fund.

Secondly he was harshly criticized for unilaterally negotiating and bargaining with the attorney for the fire union, outside of the collective bargaining agreement. This action was such a concern that Commissioner Tobia stated he would be bringing a motion to absolutely prohibit this, which Commission Chair Rita Pritchett stated she would support. More to come on that in the future pending public record requests. Lober denies the accusation.

Commissioner Lober is the only commissioner who is up for reelection, and many have stated his recent actions are seen as pure pandering, or even blatantly attempting to literally buy votes and support with federal funds that were intended to help those in need from the pandemic.

At the end of his presentation today, he stated he would likely be putting out a memo at the next meeting which will outline where the several million dollars he has left at his disposal will go in the form of small business grants. Which means he will be picking and choosing what businesses he decides are worthy to get the money on his own.

It is highly suspected that one of those businesses will be with his very close friends at Space Coast Daily who provide favorable coverage of him and pay for play articles. He regularly promotes them from the dais calling them a legitimate news source “unlike Florida Today.”

The next meeting and final for the year will be December 22nd.