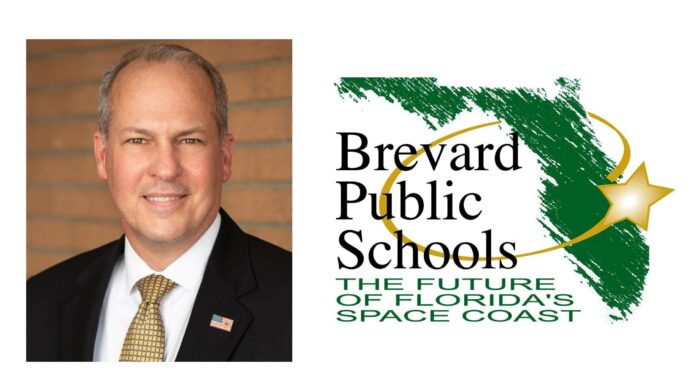 At the first meeting of the newly elected School Board in Brevard County, District 1 School Board Member Megan Wright brought up for discussion the contract for Superintendent Dr. Mullins. The item was not part of the agenda, so the public had no way of knowing in advance that the board would try to out Dr. Mullins on their first day.

Wright gave little reason for such a drastic move other than she felt the perception from teachers was they wanted new leadership. Gene Trent of District 2 stated he simply agreed with removing Dr. Mullins, and newly appointed Chair Matt Susin who was part of the board that hired Mullins also agreed for removing him, but gave no reason.

Florida Today reported later that State Representative Randy Fine had discussions with all 3 members of his desire for them to fire Dr. Mullins on day one in exchange for his support. Fine told Florida Today that “that’s no secret.”

School Board Members Katye Campbell and Jennifer Jenkins strongly opposed the move. Campbell pointed out that the superintendent executes the direction of the board which he has done since being hired, and that he should be given the opportunity to continue to do so. Jenkins went on to list the many accomplishments of Dr. Mullins since taking on the position. It was clear however, that a deal had already been made, and many believe it happened in violation of Florida’s Sunshine Laws as evidenced by Fine’s own statements acting as a satellite intermediator between the board members.

When Dr. Mullins was given an opportunity to speak after the board’s discussion, he offered to come to a mutual separation agreement with the board. Today a special meeting was scheduled for December 5th at 9am. We are told that the meeting was scheduled specifically at this time as opposed to 5pm to intentionally limit the public’s participation, as the public’s initial response to this move has not been positive.

School Board Chair Matt Susin has received tremendous backlash, and even losing support from he previously had for his run for State House in 2024. Susin has been quietly lobbying for support of his upcoming campaign both financially and otherwise from key players in the community. Organizations like The Viera Company and other large businesses and organizations have expressed their disagreement with what they call a political decision not in the best interest of students, but allowing the board to be used as a pawn for political retaliation from a “man-child State Representative.” (Direct quote)

The newly published agenda for the December 5th meeting does allow for public comment before the decision is made. What has not been discussed is the financial cost of such a move.

Dr. Mullins contract allows for 5 months of severance pay to include benefits for termination of his employment. That also includes unpaid vacation leave, which Mullins has 331 hours (2 months) of. Additionally he has 545.875 hours of unused sick leave. (3.5 months) Those unused hours alone speak to the dedication of Dr. Mullins to the job. That salary and pay is also subject to a pay raise he would have gotten which will be retroactive to July 1, 2022. The value of the unpaid leave alone is approximately $110,000. According to the agreement, the total cost to oust Dr. Mullins will be around $400,000 according to our calculations.

The School Board in addition to that will still have to pay an interim Superintendent to fill in for his position, as well as pay a consulting firm likely around $50,000 to search for new applicants.

According the the Brevard Federation of Teachers President, 42 teachers have resigned since the election of the new school board. There is a mass exodus of teachers in staff expected to follow the removal of Dr. Mullins.

You can see the proposed mutual separation agreement here.