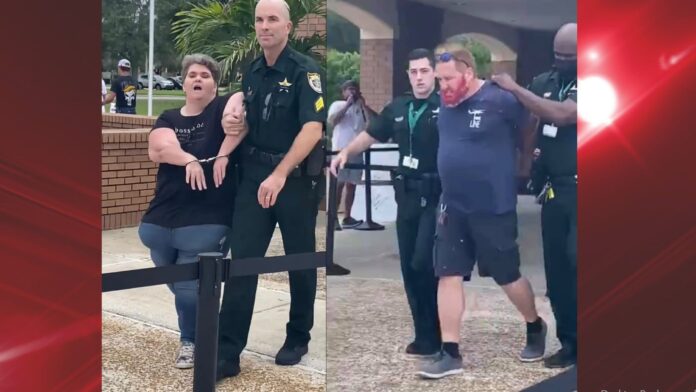 46 year old Janice Crisp of Cocoa was arrested yesterday on multiple charges at Brevard Public Schools prior to the start of its scheduled meeting. Her charges are interfering with school admin functions, and trespassing school grounds refusing to leave.

Arrested along with Crisp was 34 year old Nicholas Carrington. He had more charges than Janice to include trespassing, resisting arrest w/o violence, and disorderly intoxication. Neither Crisp or Carrington have children. It is also of note that Carrington and Crisp both live-streamed their own arrests, showing their behaviors that lead to them being removed. Carrington also did a live video from his vehicle while on his way to the school board meeting. It is not known if he was intoxicated while driving to the meeting.

In Carrington’s live video, he states he will “bust a cap” in anyone who tries to stop him.

Both of these individuals have a history of arrests for violence. Crisp (aka Janice Stout) was arrested at the Back Center in Melbourne, for “throwing her blood” on a security guard. Nicholas has arrests for domestic violence, DUI, and a fugitive felony warrant.

Crisp is a volunteer for State Representative Randy Fine’s campaign, and a former 2020 Palm Bay City Council candidate who was supported by both Fine and Brevard County Commissioner Bryan Lober. Fine, Lober, and Crisp, have all made national headlines repeatedly in the past 2 years for their behavior towards private citizens.

Janice Crisp is leading a recall campaign of Jennifer Jenkins and her along with about 20 other protestors showed up to Jenkins’ private residence last month in Satellite Beach chanting at her and her family to include her 5 year old daughter while she was playing outside. Crisp repeatedly stated that “Randy sent us here” and “Randy says hello,” referring to Randy Fine. Representative Fine just recently himself showed up to the private residence of a private citizen to confront him about signs he posted critical of Randy Fine. Randy Fine himself is under multiple criminal investigations by the Florida Department of Law Enforcement.

Crisp is seen on cell phone video deliberately coughing into the face of Jennifer Jenkins. Crisp has been critical of Jenkins’ stance on mandatory masks in schools for children. Recently a man in Orlando was arrested and charged for doing the same to a law enforcement officer during a traffic stop. Satellite Beach Police investigated the incident, but did not arrest Crisp for her actions.

Jenkins (Democrat) defeated Republican incumbent Tina Descovich overwhelmingly in last year’s election in the Republican majority district. Her win is based heavily upon her position on masks during the campaign which was in contrast to her opponent. After her defeat, Tina went on to co-found Mom’s for Liberty.