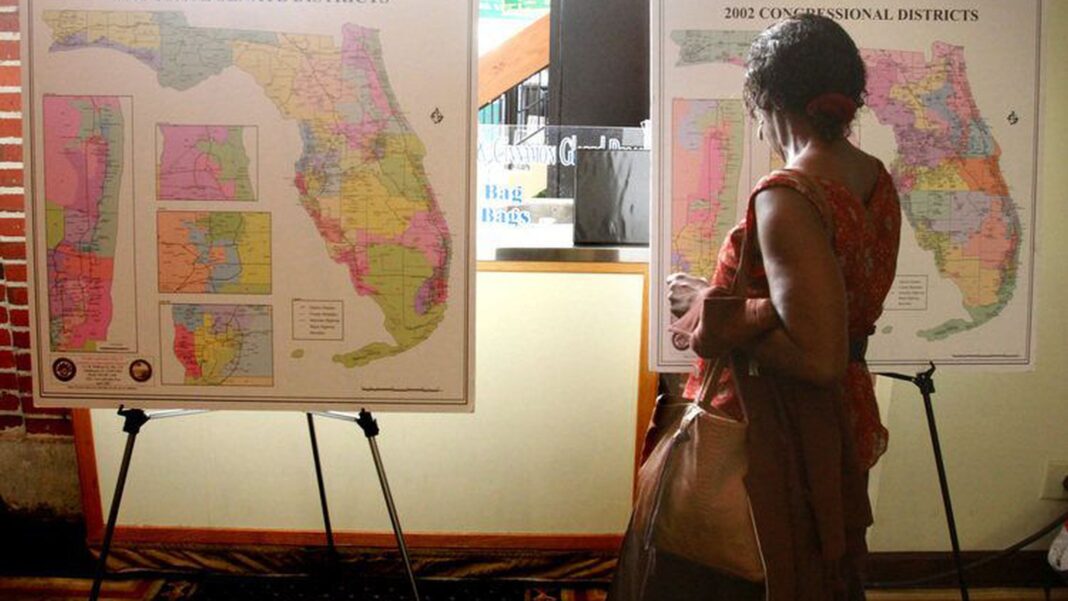 Every ten years the State of Florida redraws it’s voting district maps to reflect new census data. Those proposed maps were made public for the first time this week. It is required by law that districts be roughly equal in population from Congress down to school board and council seats. There’s other requirements that prohibit ‘diluting’ minority voters and making sure districts are contiguous. These rules reflect basic tenets of equal representation, a cornerstone in a Constitutional Republic.

However, in 2019 the Supreme Court ruled that federal courts cannot determine whether election maps are “too partisan”, essentially giving states free reign to draw voting districts favoring the political party in power. Democracy and voting rights advocates have long condemned this practice of gerrymandering as being essentially corrupt.

Ten years ago, Florida’s redistricting efforts were led by the Florida Senate’s then-President and current Brevard County lobbyist, Mike Haridopolis(Melbourne). The maps drawn in 2011, and signed by Gov. Rick Scott led to Republican control of nearly two thirds of the State Legislature. This, despite Republicans only getting about half of the votes in very close statewide elections. Voters sued in 2012, and the courts ruled that the state’s congressional districts had to be redrawn. Mike Haridopolis’ lobbying business partner, Steve Crisafulli(Merritt Island), was Speaker of The Florida House in 2015 when that ruling was issued, and he refused to redraw the districts, leaving the work to be done by the courts.

In this year’s redistricting efforts, Brevard Republicans continue to be well represented in the process, which is not surprising in a county where 42% of the voters are registered Republican, but GOP candidates hold 100% of the partisan elected positions. Those seats are the 5 County Commissioners, 5 Constitutional Officers, 5 Port Authority board members, 4 State Representatives, 2 State Senators, and one Congressperson. Municipal, school board, and special district races are conducted as non-partisan under Florida law.

The maps released by the Florida Senate this year were graded as “B” by The Princeton Gerrymandering Project because they adhere to some of the basic rules, but received lower marks for not being competitive. The congressional district maps had only four districts out of 28 deemed competitive or ‘toss-up’. Separate grading by the Fair Districts Coalition gave the maps mostly D’s and F’s because they are severely skewed to favor Republicans. In addition to drawing maps favoring themselves, Republicans have closed the process to public input, and are actively purging voters from voting registration rolls.

Anti-democratic measures being undertaken by Republicans in Florida include many things.

A 2019 law passed by the Republican legislature restricted felons from voting after they served their sentences, despite a constitutional amendment passed by voters in 2018. A new law passed this year, S.B. 90, further restricted early voting, mail voting, voter registration drives, and voter identification. A lawsuit challenging S.B. 90 recently caused a public uproar at the University of Florida when the University governing board prohibited it’s professors from giving expert testimony in that lawsuit. The University has since backtracked, but the board members are all Republican donors, which raises serious questions about corruption, academic integrity, and first amendment freedoms.

Furthermore, there are currently three empty State Senate seats which Governor DeSantis has refused to fill via special election as required by Florida law. There are several ongoing criminal investigations into races where it appears Republicans used “sham” third party candidates to siphon votes from Democrats in close elections. One of those investigations in Miami has already resulted in a guilty plea from former Republican State Senator Frank Artiles.

All of this is happening as Trump’s supporters continue to claim that Democrats are cheating. His supporters’ demands for elections audits in Florida have led Governor DeSantis to propose legislation this year which would create a new “elections crimes” state government agency. The Florida Elections Commission is the board that currently handles election law complaints, and it’s top lawyer was indicted in July for conspiracy to produce/possess/distribute child pornography after federal agents raided his home in April.

Fighting back is Attorney Marc Elias, leading a national coalition of legal and elections experts who are filing lawsuits against states engaged in extreme partisan gerrymandering. He was Hillary Clinton’s campaign general counsel in 2016, and led the Biden campaign’s legal fight against the unfounded claims of fraud levied by Trump’s campaign. He has listed Florida as one of many states they are monitoring, and he has already filed lawsuits challenging the validity of gerrymandered maps in other states. Many Florida Democrats have condemned this year’s redistricting as politicians choosing their own voters and say Republicans are ignoring the Fair Districts provision in Florida’s constitution.

Florida leads the nation in number of January 6th rioters arrested. Florida is also home to former president Donald Trump who continues to claim he won the 2020 election. A poll conducted in May showed that about 50% of Republicans believed Donald Trump was still actually the President, despite Joe Biden being duly sworn into the office on January 20th this year