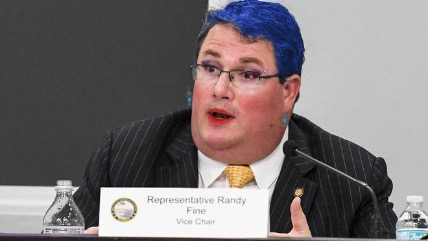 But seriously…(and sadly) Randy’s chosen target for this week is Drag Queens reading books. It’s no secret that Randy has waged war on the LGBTQ+ community. Whether or not that is an internal fight within himself more than an outward one is yet to be determined. One thing that has been determined however, is that whenever Randy Fine says something on Facebook it’s either completely false, or extremely exaggerated and sensationalized. Keep in mind, this is the same man that actually paid a lawyer to split up his eyeglass cleaner in his divorce decree.

After a 2 year hiatus due to Covid-19, Space Coast Pride Fest is back and being held in Downtown Melbourne this week. It has been a historically extremely successful and well-attended event in our community. Fine has chosen to insert himself into the mix after noticing there was a headline without his name in it. He posted the following:

Fine’s office is conveniently located across the street from Pin Ups strip club. This may be why he is so familiar with female stipper “work costumes.” In addition to this post and several others, Fine listed the event corporate sponsors, some of which are the largest employers in this county, and encouraged his rage-fest followers to call them to “save the kids.”

What Fine doesn’t know is that this exact same event was held in 2019, and surprisingly, no one cared.

So what actually is Drag Queen Story Time if it’s not strippers giving lap-dances to kids while reading Charlotte’s Web?

It’s adults, dressed in costume reading children books to children. Whether or not you agree with that is completely up to you. Randy Fine has called himself the champion of “Parental Rights.” Apparently that only applies to parents who choose to parent how he sees fit. Some have said he’s for parental rights, just not parental lefts. It may come as a shock, but no one is forced to attend story time. It is completely up to the parents as to whether or not have their kids sit and listen to a book be read to them.

Fine is a master of inciting his followers to do his dirty work. I was recently asked by a reporter from the Washington Post, “How much influence does Representative Fine have in Brevard County?” My answer was zero. Representative Fine has no more influence in Brevard than a high school bully does at Palm Bay High. He simply threatens and extorts in order to boost himself up. He’s the arson that sets a fire so he can be the hero that puts it out.

Melbourne Mayor Paul Alfrey today released a statement of support of the event after a tremendous amount of harassment to sponsors and others came as a result of Fine’s flamboyance.

What we see here is the contrast of two government officials; one supporting the 1st amendment and civil rights he swore to uphold, and the other abusing them. Randy should be reminded that the Nazi’s didn’t only go after the Jews, but also the gay community, much in the same way he is now.